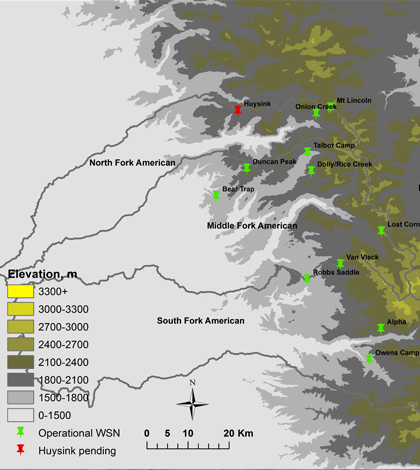 The American River Hydrologic Observatory in California is the world’s largest wireless sensor network. But it wasn’t always that way.

The network, built with support from the National Science Foundation as part of the Southern Sierra Critical Zone Observatory (CZO), began with a need for data. The hope was to illuminate the changing conditions of the water cycle in the Sierra Nevada.

But there was a problem: The equipment in existence at the time of the network’s deployment, around 2013, just wasn’t robust enough to stand up to operational needs.

“What we learned at the CZO allowed a former student and I to make the components,” said Steven Glaser, a professor of civil and environmental engineering at the University of California, Berkeley. “In terms of hardware, there was nothing good available that would work in the mountains. That’s how Metronome Systems was born.”

The company makes low-power wireless computing and sensing devices that deploy quickly to form large-scale networks to cover areas of massive scale. They were a perfect fit for the unpredictable conditions within the mountain range and for meeting the expansive goals of the observatory. The components are of rugged, quality construction. And with the infrastructure that Glaser helped to develop, it’s possible to add and remove any number of sensors and devices through “drag-and-drop” software. In addition, the power requirements of each node is minimal, capable of being powered by solar panels or a single D-Cell battery for years.

These types of hardware, comprising 15 networks, each with 10 to 15 sensor stations and linked by 35 other nodes, were launched over the course of several summers when there was no snow.

At each of the 15 locations, sensors gather measurements of air temperature, humidity, solar radiation, soil moisture and snow depth. Data on the last parameter have been affected by California’s drought conditions, Glaser says.

“We got a big problem that there was no snow the last two years. We have great temperature and humidity data and a lot on the weather, but not as much on the hydrology because there was no snow,” said Glaser. “We’re hoping this year will be the opposite.”

But despite the impacts that drought has had on the three-year-old observatory’s snow data, it has yielded some useful findings over its lifetime.

“We’ve been using it (the data) in studies on soil moisture. The effects of the drought on soil temperature has played a larger role as things have played out in the years, which was surprising,” said Glaser. “Measurement points taken into account, we get temperature differences at night we don’t see in the day. And there are effects from humidity on (the area’s) features.”