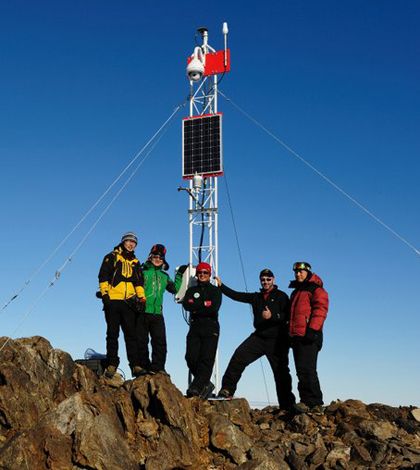 There are ways to keep 10-hour work days installing weather monitoring stations in the bitter cold of Antarctica tolerable. The occasional break for tea to warm up and a Gore-Tex jacket to block the wind help, says Ronald Ross, an Australian-based independent electrical consultant who finds himself out on the ice of the southernmost continent once a year.

While the benefits of a hot beverage and a good coat are obvious, there are other important protective steps that aren’t.

“You’re lathering on a lot of sun tan lotion, which seems a little odd out in such a cold area,” Ross said. “But you get fried. Without suntan lotion you’d be totally red within fifteen minutes. It’s that intense when the sun is out with the reflection off the snow.”

Ross’s work has taken him to Antarctica over a dozen times. His path there began in San Francisco, where he worked as an electrical engineer in Silicon Valley. He also mentored aeronautics and astronautics students at Stanford University who were producing their own satellites. He was working with a student on a weather station project when the NASA funding behind it dried up. In an effort to continue the project, they switched their focus from space to another extreme environment that would require remote communications: Antarctica.

After traveling to the continent and successfully setting up a small example station, their work caught the interest of a private climbing expedition that requested a weather station for their camp. That sort of work continued, with their stations growing more sophisticated each year. They progressed from simple weather stations transmitted data over amateur radio to weather stations coupled with cameras transmitting data and photos over Iridium modems.

By that time, Ross was attending annual gatherings hosted by the University of Wisconsin-Madison for people interested in automated weather stations Antarctica.

“We went there primarily to learn what real professionals were doing,” Ross said. “We were sort of scratching in the dark. We had ideas, but we wanted to get something that would be useful to scientists. But we weren’t quite sure what that exactly was.” At one year’s conference, Ross and his collaborators gave a presentation on their stations that coupled cameras with Iridium modems. After that, they were approached by Douglas MacAyeal, a geophysical sciences professor the University of Chicago, about building stations to put on icebergs. Unlike some of aspirational conference chatter, this wasn’t an unfunded ambition, doomed to fizzle out. MacAyeal had several years of National Science Foundation for the project. Ross spent the next few years installing stations out on the ice around the Ross Sea.

Ross said the word started to get around about their remote camera stations and the number of collaborators grew. “One thing led to another, and we went from a student technical project to supporting scientists with these instruments,” he said.

Their stations grew to include weather sensors like the Vaisala WXT510, and their list of partners grew to include Ted Scambos, senior research scientist at the National Snow and Ice Data Center. They collaborated to install stations on icebergs in the area of Larsen Ice Shelf in 2006. The stations included cameras and logged location data, allowing the scientists to track the ice masses as they migrated north.

The cameras on the iceberg stations were initially pointed at the instruments to check and see if snow was accumulating on the sensors and disrupting data collection. But they’re also useful for watching for changes in the ice, particularly for the National Snow and Ice Data Center stations overseeing an ice shelf along the Antarctic Peninsula. “We’re just monitoring that, waiting for pieces to break off,” he said. Other applications of the cameras include monitoring a penguin colony near McMurdo Station, the U.S. Antarctic research base. That station, for the Penguin Science project led by David Ainley, has helped track the movements of banded Adelie penguins as well as the movement of ice around the rookery that can potentially block the birds’ route back to the site.

The website for the “penguin cam” has generated quite a bit of Internet traffic, Ross said. That sort of engagement made possible by the cameras is important because federal funders of research are increasingly trying to reach out to the public and show them their tax dollars at work, he said.