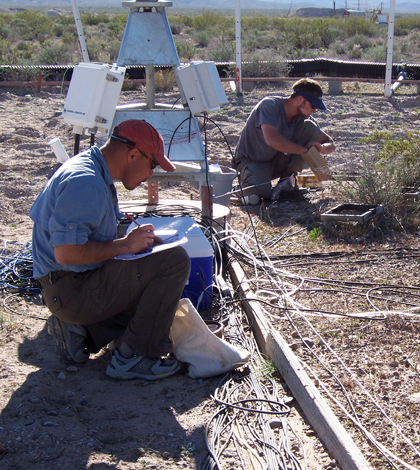 The recently published results of that experiment — a rare long-term manipulation of an in-tact ecosystem — show that arid environments like the Mojave Desert will absorb more and more carbon as atmospheric carbon dioxide concentrations rise over the coming half-century.

The study measured carbon uptake by desert plants and soils in plots exposed to modern carbon dioxide levels and compared the results to similar plots treated with concentrations of the greenhouse gas projected for 205o.

As carbon dioxide concentrations rise from today’s level of nearly 400 parts per million to the 550 parts per million expected in 2050, the rate at which desert landscapes sponge up that carbon will also increase, according to R. Dave Evans, a professor of biological sciences and lead author of the study.

“What our study shows is simply after 10 years how much extra carbon accumulates under elevated CO2,” Evans said. “Under a future CO2 atmosphere, we had significantly more carbon uptake than under ambient conditions.”

The experiment took place in the Mojave Desert on the grounds of the Nevada National Security Site, formerly known as the Nevada Proving Grounds and then the Nevada Test Site. The site is 1,300 square miles of desert and mountains operated by the U.S. Department of Energy where nuclear weapons tests in the 1950s produced mushroom clouds that could be seen from Las Vegas.

The site provided protected pristine desert land ideal for the study, but it came with some quirks. That included a high-security environment that required a clearance to even carry a camera onsite.

“We had magnificent security, you can put it that way,” Evans said. “We didn’t worry about anybody bugging our site.”

The work occurred within the Nevada Desert Free-Air CO2 Enrichment Facility, which is directed by Lynn Lynn Fenstermaker, Desert Research Institute associate research professor. The principal investigators who established the site and experimental setup are Bob Nowak, professor in the University of Nevada Reno’s Department of Natural Resources and Environmental Science, and Stan Smith, professor in the University of Nevada Las Vegas’ School of Life Sciences.

“They had the wherewithal almost two decades ago to start to question how these arid ecosystems are going to respond to global change,” Evans said. “And one of the biggest factors is elevated carbon dioxide.” A photo from a remote-controlled helicopter of one of the test plots. The white spokes are PVC pipes through which CO2-enriched air was pumped. (Credit: Lynn Fenstermaker/Desert Research Institute)

The facility launched in 1997 with nine 23-meter-diameter rings that blocked off open-air sections of desert exposed to three different carbon dioxide treatments. Three sites were “fumigated” with ambient levels of 380 parts per million, three more with 550 parts per million and the rest received no fumigation. No one set foot within the rings for 10 years, and researchers relied on a suspended trolley system to make measurements within the plots.

In 2007, the rings were excavated to a depth of 1 meter and meticulously indexed, with each plant’s location, species and weight noted. Even the root systems were attributed to individual species. Then the amount of carbon in the plants, roots and soils was calculated.

The results suggest that desert ecosystems’ role as sinks for rising atmospheric carbon dioxide concentrations is more significant than previously recognized. And even though forests absorb more carbon, arid landscapes’ wide global distribution — they cover 47 percent of the planet’s land surface — will bolster their contribution.

This new knowledge comes as a result of a long-term experiment in an in-tact ecosystem that is rare in any kind of science, Evans said.

“A big experiment like this rarely runs that long just because of the costs involved,” he said. “We were very fortunate to have the support of our funders to let it run for a decade and really get some interesting results.”