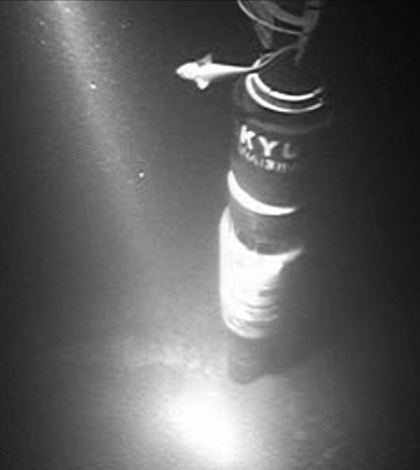 An underwater photo of the rig from the Japanese Trench Fast Drilling Project (Credit: JAMSTEC)

A group of 27 scientists from 10 countries boarded a Japanese research vessel in 2012 to study the Japan Trench and possible causes for the nation’s devastating 2011 tsunami, according to a McGill University release.

The researchers drilled three holes into the trench from the R.V. Chikyu to examine a rupture zone in tectonic plates that caused the massive upheaval of water. They drilled 800 meters beneath the seafloor.

They found the fault between the Pacific Plate and North American Plate was less than five meters thick. Clay within the fault acts like a lubricant for the plates. In combination these factors allowed the plates to slip and bend, which in turn caused water on the surface to form massive waves.

Image: An underwater photo of the rig from the Japanese Trench Fast Drilling Project (Credit: JAMSTEC)