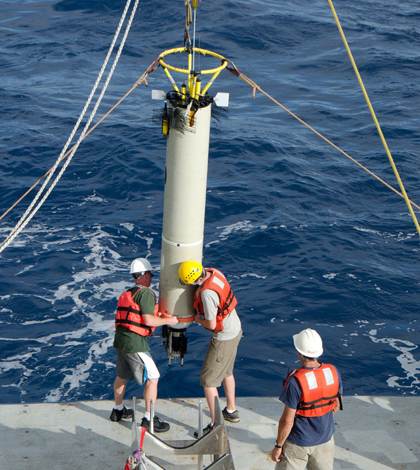 Researchers who study climate change are understandably interested in the role waves play in the process. They have pinpointed ways to study wave behavior and often have to travel to remote areas of the ocean to collect data.

A team at the University of Washington recently traveled across the globe to a site thousands of miles off the New Zealand coast to chart one of the world’s largest deep-sea waves. Their study’s location placed them squarely over the Samoan Passage – a ridge that creates deep-sea waves up to 800 feet tall. Their ongoing research will help improve climate equations by taking the actions of mammoth, deep ocean waves into account.

“Climate models work by dividing ocean flow into boxes about the size of a city, say 10 kilometers across,” said Matthew Alford, associate professor of oceanography. “The models can’t resolve anything smaller than that. The models can’t account for turbulence. We want to parameterize these phenomena in order to better the models.”

Those include phenomena like water turbulence or flow and how those might change in response to a changing climate. But the equations can’t be updated without gathering fresh data, and Alford says doing so is a tremendous amount of work.

He and others from the University of Washington spent 40 days at sea, on top of water 5,000 meters deep. They set up 14 braided Kevlar mooring lines around the passage, each over a mile long. The lines provide tracks for moored profilers that automatically crawl up and down the lines taking measurements on turbulence and other parameters. The team deployed profilers that crawl up and down Kevlar lines recording measurements of turbidity (Credit: University of Washington)

CTD (conductivity, temperature, depth) sensors were also towed along by the ship–a not-so-standard way to use a standard type of instrument, says Alford. By towing the sensor instead of deploying it as most others do, the team was able to track the spatial structure of deep waves.

“The wave is pretty stuck to the bump that’s making it. It’s more like a standing wave you’d see in a stream,” said Alford. “If you go kayaking and see a rock or a bump in a stream, there’s a wave there.”

Twenty years ago, scientists guessed that the waves generated by the Samoan Passage created a lot of turbulence. Alford says his team was able to confirm those inferences. The area’s waters are fed from the south with water from the Southern Ocean, which contains properties from the water’s origin in the North Atlantic. Characteristics of the water allow for it to be tracked as it makes its way northward. But once the water enters the Samoan Passage region, it is churned so much that it shows no trace of the Atlantic water when it exits. The researchers towed a CTD through the deep-sea wave (Credit: University of Washington)

The team’s measurements confirmed that there’s really strong mixing. The unexpected discovery was that the breaking wave was responsible, says Alford. A return trip is planned in January 2014 to recover the moorings and take more measurements.

“One thing that’s significant about the Samoan Passage–special, really–is that it’s a place where a substantial fraction of the ocean circulation is going through,” said Alford. “The physics will help us get water models right for other locations.”