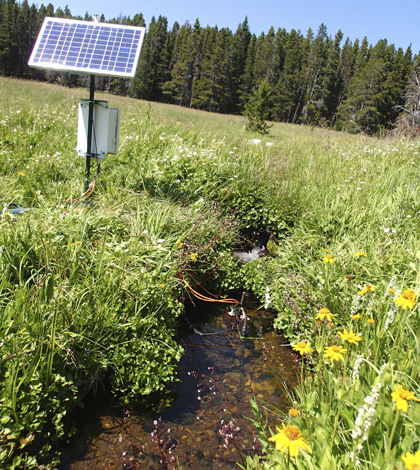 A sensor station on a stream near the site where it emerges from the ground in Tenderfoot Creek Experimental Forest (Credit: Erin Seybold)

Recent research from stream scientists suggests that the systems they study may have a bigger role in the global carbon cycle than previously understood. With a new generation of sensor technology, scientists are developing a clearer picture of how streams take up carbon from the landscape and what happens once it gets there.

Even though streams make up very little of the Earth’s surface and contain a small fraction of the planet’s pool of water, the amount of carbon dioxide they release to the atmosphere or dissolved carbon they move downstream can be significant. In some cases, the carbon moving in and out of a stream can be the difference between a watershed being a carbon sink or a carbon source, said Erin Seybold, a doctoral student in ecology at Duke University.

“This recognition of their global role has spurred a lot of stream research to try to understand what the role is in different ecosystems,” Seybold said.

That’s especially relevant in mountain stream systems, Seybold said. Snowmelt is the dominant influence on carbon and nutrients flowing into those streams, but it occurs during a time of year when remote study sites can be hard to get to.

“You can imagine that when there’s a lot of snow on the ground and your site is only accessible by Forest Service roads, it can be really hard to get there and try and get equipment in,” she said. “Now that we have these in-situ sensors, we can put those out there and they can do a lot of the work for us during periods of time when we really can’t be in the sites.”

Seybold’s work builds on previous research by McGlynn into how water moves through complex topography. Though a watershed is generally understood to be an area of land that all drains into one waterway, the entire land area isn’t necessarily contributing water year-round.

In alpine landscapes, for example, the hydrologic connectivity changes from the snowmelt season–when the watershed is saturated–to later months when the land dries up.

“If a water drop landed on a part of the landscape in May, the whole watershed is connected, so it’s going to make its way into the stream,” Seybold said. “Later in the season, if it falls in the same place, it may not be hydrologically connected, so it doesn’t necessarily influence the signature of chemistry that we see in the stream.”

In other words, water isn’t going to pick up the organic carbon sloughed off of terrestrial plants from every area of the watershed and carry it into the stream. By that logic, the patterns of how carbon flows off of the landscape and into the stream where aquatic organisms can make use of it should change as the seasons pass.

Seybold hopes to capture those changes over the seasons, as well as even finer time scales like weeks or days. Six sensor stations, three each along two streams in the Tenderfoot Experimental Forest, will make that possible. Each station includes a sensor for dissolved organic matter, along with instruments for a host of other parameters including dissolved oxygen, dissolved carbon dioxide, conductivity and more.

They’ll also use the dissolved oxygen and carbon dioxide data to study changes in stream metabolism, and a nitrate sensor to study nutrient uptake. Seybold said working with sensors in remote systems is an opportunity to look at processes at fine-scale resolutions that scientists haven’t seen before.

“There have been a lot of studies that have shown that seasonal behavior of a system that you might capture with a few samples can be very different than daily variation that is controlled by a totally different driver,” she said. “In some ways, we are getting a baseline understanding of how these systems work. We haven’t done that on finely resolved timescales before.”

Top image: A sensor station on a stream near the site where it emerges from the ground in Tenderfoot Creek Experimental Forest (Credit: Erin Seybold)