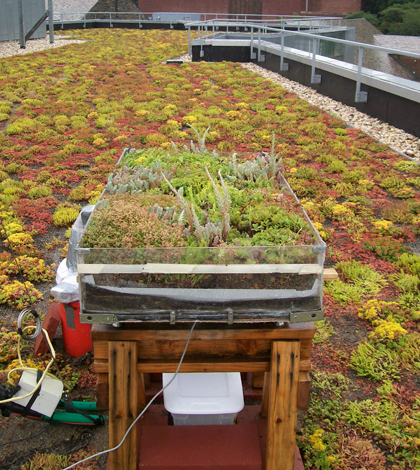 A weighing lysimeter tracks the reduction in mass before and after rainy or dry periods, giving a precise measure of evapotranspiration. (Credit: Franco Mantalto)

When it comes to urban greening, many people think rooftop gardens are a good idea. There are now presumed benefits like shade and reduced costs in heating and cooling. But when you scratch the surface, these and other benefits of green spaces are not yet very well quantified.

As it turns out, a key metric to charting urban green roof success is evapotranspiration, a combination of evaporation and plant transpiration. To learn more about ET and establish better procedures to estimate ET from green roofs, a group of researchers from Drexel University set up an experiment in Bronx, N.Y. Their work, published in the American Society of Civil Engineers’ journal, will make ET estimates for urban green spaces more accurate.

“There are different ways of estimating evapotranspiration. Many of the empirical methods are based on energy and water balance computations, and use crop coefficients to consider variability due to plant type,” said Franco Montalto, associate professor of civil, architectural and environmental engineering at Drexel University. “A big question is whether these equations are appropriate for green roofs and other urban green spaces.”

Another direct way to measure ET involves the use of a weighing lysimeter, a sensitive scale placed under a section of green roof that can detect rainfall input and water lost to the atmosphere through evapotranspirative processes. ET over a particular dry period is equivalent to the reduction in recorded mass, converted into a depth of water.

Montalto and his group are using a weighing lysimeter in their study as a reference point. They compared the lysimeter ET values to those obtained by empirical equations derived long ago for use in agricultural studies. They were trying to determine whether, with appropriate crop coefficients, these classical equations could reasonably predict green roof ET.

“We’re trying to get better at predicting the effectiveness of urban roofs,” said Montalto. “Can we characterize their stormwater capture performance using the same old equations or do we need to develop new ones?” Montalto says that the equations will likely need to be updated. The ones existing for agricultural applications are for uniform, well-watered crops in a field. But the plants used on green roofs are quite different.

“It’s hot up there,” said Montalto. “The soils dry up, and so you often you pick desert-adapted crops like sedum, which is certainly not well-watered.”

Irrigating a green roof, he says, could potentially accelerate ET rates. “By adding more water, ET can be accelerated beyond the rate that would otherwise be possible in this water-limited environment. We have to know how much is evapotranspiring from the roof in order to quantify annual stormwater capture volumes accurately,” said Montalto.

On the Bronx roof, multiple sensors were used in the analysis. Soil moisture sensors tracked the wetting and drying of the growing medium in response to ET, which was also measured directly with the weighing lysimeter. A climate station was used to chart precipitation, wind speed and direction, and solar radiation, and other microclimatic variables needed in the agricultural ET equations. A weighing lysimeter tracks the reduction in mass before and after rainy or dry periods, giving a precise measure of evapotranspiration. (Credit: Franco Mantalto)

Montalto and the rest of the research team found that crop equations worked under certain sets of conditions. Under other conditions, they needed to be adjusted.

“We expected we’d need to develop new crop coefficients,” said Montalto. “And we’re optimistic that we can adapt those equations for use in green spaces.”

Top image: A weighing lysimeter tracks the reduction in mass before and after rainy or dry periods, giving a precise measure of evapotranspiration. (Credit: Franco Mantalto)