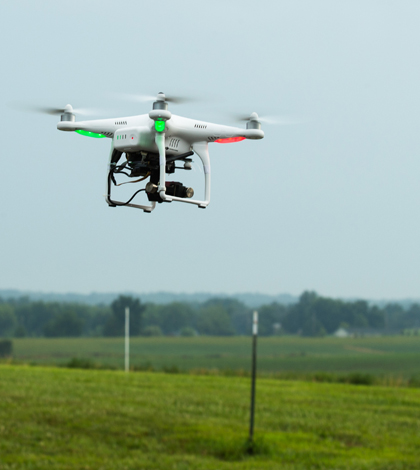 Unmanned aerial vehicles have been controversial since  the technology expanded beyond its military origins into the private sector, where current law still struggles to address concerns over privacy and safety.

The Department of Agriculture at Southeast Missouri State University doesn’t seem dissuaded by the fuss, however. They recently dropped close to $6,000 on a new drone that students will pilot on monitoring flights over university-owned farmland.

“We actually saw a drone being operated at a trade show,” said department chairman Mike Aide. “We decided as a faculty that this would be a great addition to support our curriculum.”

The drone, which has earned the nickname “Ag Force One,” features a powerful camera capable of still photography and video recording. It can reach linear speeds up to 35 mph and hover in place with near-perfect stability. Students will fly the drone a few feet above rows of crops, taking pictures every five seconds. After each flight, they’ll download camera data into a computer for further analysis.

Aide says that the four-rotored aircraft will expedite routine crop monitoring that looks for insect damage, disease and nutrient status. Already, the department has used it to check in on newborn calves.

Strict protocol will dictate when, where and how the drone is used, according to Aide. Flights will only take place on university property and will not ascend to heights above 400 feet, as per Federal Aviation Administration guidelines. Although the drone’s camera films in real time and can act as an eye for the pilot, students will be required to maintain line of sight on the unmanned vehicle — mostly to keep from losing it, Aide noted.

“We are very receptive to the nervousness that drones might create in the larger community,” Aide said. “We are hoping to show them the value of imaging with the drone and will try to mitigate any concern that people have about privacy.” Lawmakers, he said, are faced with the tricky task of protecting privacy without stifling innovation.

In five years, Aide predicts that half the agricultural producers in Missouri — if not the country — will possess drones of their own. He pointed out that only a couple of years ago, this technology was commercially unavailable. Now a hefty pocketbook is the only prerequisite to owning an airborne robot.

“I think what we’re seeing in agriculture is the emergence of technology,” Aide said. “Some of those technologies are genetic, some are chemical, but we’re also seeing computer capabilities and electronic capabilities coming into our monitoring practices.”

While the drone’s greatest value is its ability to quickly perform commonplace but time-consuming monitoring tasks involving crops, livestock or irrigation, the simpler pleasure of the technology isn’t lost on Aide: