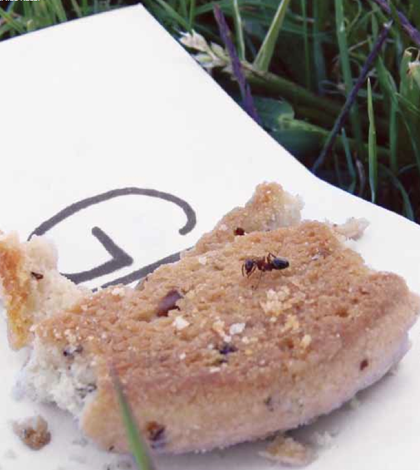 An ant feasts on a pecan sandie outside of the Fondriest office. (Credit: Nate Christopher)

A look back at 2014 on the Environmental Monitor shows it as our most ambitious year yet, with more than 240 original features on environmental research, technology, and the scientists and environmental professionals behind the work. We found our angles on some of the biggest environmental stories of the year, including the ongoing California drought, the recovery of the Elwha River after the largest dam removal in history, and the toxic Lake Erie algal bloom that left 500,000 Toledo residents without access to tap water for drinking or bathing. But we also dug up some smaller stories that might not have gotten much attention otherwise.

Here’s a look at a few of the stories that our staff enjoyed writing the most this year.

Ruler and a rain bucket: Weather Service honors 125-year record at UConn
When Daniel pitched a story on UConn’s 125-year record of weather data, I never expected it to come back with a four-paragraph lede casting Steve Olsen, the man at the center of the story, in the midst of something like an archeological dig. What follows is a tidy piece on the evolution of meteorological data collection and a quest to maintain tradition in the face of the inexorable march of time.

School of Ants project shows citizen scientist data is up to snuff
We’ve covered plenty of citizen science initiatives, but the School of Ants project is one of the few that not only relied on volunteers for data but also analyzed the quality of the amateur data against data collected by lab-trained researchers. This one also gave our designer a chance to buy a box of pecan sandies and sit outside taking pictures of ants for this story’s spread in the Summer 2014 print edition of the Environmental Monitor.


EveryAware portable sensors and social games approach air pollution data from ground up
Telling a good story about data isn’t always easy, but it helps when the people you’re writing about are using it for something a little more interesting than populating spreadsheets and running regressions. That’s the case with this story on the European Union’s effort to “gamify” data from wearable noise and air quality sensors.

And a few of mine:

For surveying dangerous hippo pools, Platypus robots go where people can’t
Scientists used a robot disguised as a crocodile to investigate a pool on Kenya’s Mara River where a superlative amount of hippopotamus waste has been linked to downstream fish kills. Sometimes the plain facts are all you need for a good story.

Friday followup: California drought spoils waterfall erosion field research
This is the inaugural edition of an occasional series of posts where we’ll check back in with researchers we’ve talked to for an update on their work. It’s a feature I’m looking forward to, and the first foray didn’t let me down. I went back to Joel Scheingross, a geology doctoral student at California Technical University who in 2012 was instrumenting a plunge pool below a waterfall to study how storms move sediment through the system. Two years later, no storms in drought-stricken California have been large enough to trigger the sediment transport event he’s looking for. Though it seemed at first like a non-starter, for me it turned into an enlightening look at the risks of fieldwork and the far-reaching and unexpected effects of the drought.

Top image: An ant feasts on a pecan sandie outside of the Fondriest office. (Credit: Nate Christopher)