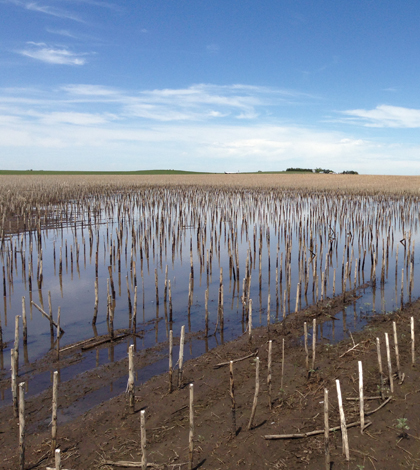 A cropland playa that been planted through (Credit: Dale Daniel)

Across the High Plains, playa wetlands that dot the landscape bolster the region’s plant diversity, offer scarce habitat for amphibians and provide points for aquifer recharge. Those functions suffer when the wetlands fill with sediment from surrounding cropland, but a recent study shows a federal conservation program has helped slow the degradation.

Playa wetlands are the dominate surface water feature of the High Plains, which is one of the most highly cultivated regions of the world, according to Dale Daniel, doctoral student in zoology at Oklahoma State University and lead author of the study.

Where there’s cultivation, there’s also erosion. In the High Plains, eroded soil tends to end up at the bottom of playa wetlands, making them shallower and shortening the length of their seasonal wet cycles.

That cuts into their ability to perform ecosystem services, like percolating rainwater down into the Ogallala aquifer, which provides much of the water for irrigation in the region. It also shortens the time the wetlands can serve as nurseries to the region’s amphibians.

“For most High Plains amphibians, this is their only reproductive site. They don’t really have anywhere else to go,” Daniel said. “If they don’t have an adequate amount of time to transform, you’re not going to have amphibians on the High Plains.”

To combat soil loss from cropped land, the U.S. Department of Agriculture’s Conservation Reserve Program reimburses farmers to take erodible parcels out of production and stabilizes the soil with native vegetation. Though the program isn’t designed to protect wetlands, it follows that those features would benefit from efforts to secure the soil on the land. Daniel’s study, which is published in the journal Environmental Science and Technology, set out to find whether that was actually the case. Daniel and his collaborators set out to calculate the volume lost to sedimentation in 258 playas across Nebraska, Colorado, Kansas, Oklahoma, New Mexico and Texas.

The survey work took them to intensely rural areas, and the researchers frequently found themselves squarely in the middle of nowhere.

“It’s pretty flat and it’s pretty desolate,” Daniels said. “There were times that the nearest gas station was an hour away from us.”

The crews surveyed wetlands in watersheds dominated by cropped land, native shortgrass prairie and land in the Conservation Reserve Program. They walked the perimeter of each wetland with a Trimble handheld GPS unit to map it, then measured the elevation to calculate the volume. By measuring the depth of sediment in the center of the wetland, they could calculate the volume lost to eroded soil. A playa wetland within a watershed under the Conservation Reserve Program. (Credit: Dale Daniel)

That suggests that while the Conservation Reserve Program has stopped sedimentation in wetlands within its lands, it can’t undo the damage that occurred before the program went into place. In addition, the program replants cropland in native grasses, but not necessarily the short-grass prairie species that would be a more natural option. The longer mixed grasses appear to disrupt runoff into the playas, leading the wetlands to be inundated less often.

Top image: A cropland playa that has been planted through (Credit: Dale Daniel)