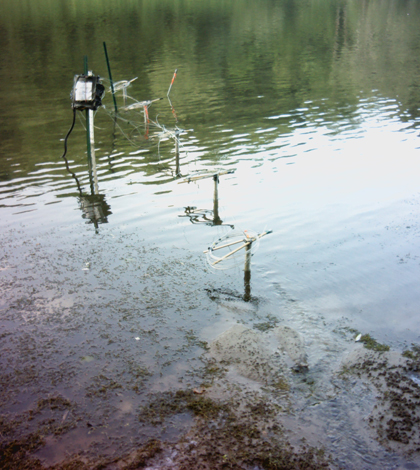 A cutting-edge method for sensing water temperatures is helping the U.S. Geological Survey identify tucked-away cold water habitats in the dam-altered Delaware River that allow an endangered mussel to survive there.

“The hydrologic regime is essentially the master ecologic variable that controls what’s happening in the river,” said Martin Briggs, research hydrologist with the USGS Office of Groundwater. Sometimes water levels drop low enough to expose the river bottom.”You have, essentially, a dry bed, which you can imagine is not a good situation for mussels.”

The people who manage the dams want scientific information about habitat of organisms affected by dam operation, especially for the dwarf wedgemussel, which is afforded legal protection as a federally listed endangered species. The USGS has counted the mussels–a species sensitive to water temperatures–in the Delaware since 2000. The scientists conducting those surveys have anecdotally reported colder water flowing over areas where they find mussel beds, as well as signs of groundwater seeps such as wet banks.

In an effort to confirm and quantify those groundwater inflows, Briggs and colleagues, in cooperation with the U.S. Fish and Wildlife Service, installed a high-resolution fiber-optic temperature sensing system in a place in the river where dwarf wedgemussel numbers were particularly strong. The results of the study–perhaps the first to use this setup in flowing water–identified a bankside groundwater seep that sent a plunging plume of cold water into the channel and along the stream bed where the mussels live.

Measuring temperature with fiber-optic cables was developed by the oil industry for keeping an eye on pipes, but has been adopted for environmental applications over the past eight to 10 years, Briggs said. The technology works by firing a laser pulse down the fiber, some of which is scattered back to a receiver. A portion of that backscatter is temperature dependent, which allows the researchers to back-calculate temperature measurements.

The highest spatial resolution this method can achieve is a temperature measurement at every meter of cable. That’s fine for laying long lengths of cable along stretches of river, but isn’t very useful for profiling temperatures in the 20- to 40-centimeter depths where the research team had identified the cold water plume. To get down to a finer resolution, they used a twist on the method–literally. They developed cables that could be coiled around a core, in this case a 5-centimeter-radius PVC pipe. A meter’s worth of cable wrapped around the pipe placed two temperature-sensing points just 1.4 centimeters apart.

The researchers pounded five meter-long, cable-wrapped cores into the stream bed every two meters in a line perpendicular to the bank and extending out into the plume. That gave them a transect with more than 300 temperature-sensing points. Data collected at 4- and 10-minute intervals over several days revealed a plume of cold water that entered the stream and dived below the warmer surface waters.

“That was really controlling the stream bed temperatures in the upper horizon where the mussel lives,” Briggs said. “Something about that inflow is likely influencing their survival.”

That influence could be a matter of keeping water temperatures low enough–in this case, up to 9.5 degrees Celsius cooler than the surrounding water–to facilitate some part of the mussel’s life process that is disrupted by warm water. Another hypothesis is that water trickling down from the seep could provide the mussels with crucial moisture when their beds are exposed during low flows.

Briggs said the centimeter-scale measurements made possible by the modified fiber-optic method was important for characterizing the mixing dynamics in the shallow water. It also provided the data needed by models that the researchers used to quantify just how much water was entering the stream through the seep.

The study, published in the journal Environmental Science and Technology, serves as a proof-of-concept for using fiber-optic cables for gathering high-resolution temperature data in rivers, which Briggs said hadn’t been done before. It also provides quantitative data that helps cement the link between groundwater seeps and dwarf wedge mussel habit.

“If we’re going to protect this habitat, we have to know why the habitat exists,” Briggs said. “That also helps us discover, potentially, more undiscovered habitat in the future.”