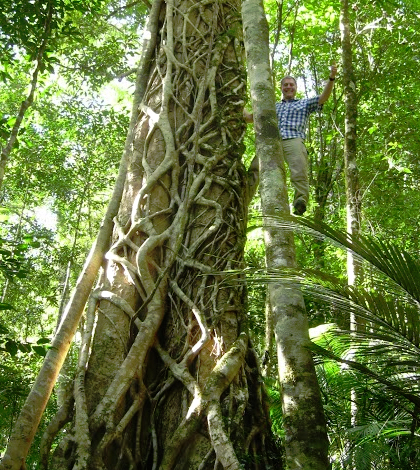 In the 1960s, University of California, Santa Barbara ecologist Joseph Connell spent years establishing long-term monitoring plots in the rainforests of Australia. He wanted to learn which ecological mechanisms promote diversity in natural tree communities. But with many rainforest trees growing only inches over dozens of years, such a study was sure to be a long one.

Five decades later, two researchers who worked in Connell’s lab are continuing the venerable ecologist’s project, and for the first time have confirmed a long-running implication from his massive dataset: Forest diversity is mostly facilitated not by massive adult trees, but by a series of conditions, or “sorting processes,” that affect tiny saplings. Their findings were published online in the Proceedings of the National Academy of Sciences.

“This is the first direct test of the idea that non-random sorting processes are stronger in smaller size classes than larger size classes in forests,” said Kyle Harms, a professor at Louisiana State University’s Department of Biological Sciences.

Harms and co-author Peter Green conducted research in the same forest plots established by Connell in 1963, and ran statistical analyses built off his data. Spending days with other researchers in Davies Creek National Park, the ecologists braved stinging insects, leeches and dwindling funding to measure the growth of tagged trees. Their most surprising finding, Harms said, was that their hunch about the drivers of forest diversity was correct.

The sorting processes that take place in the forest understory can determine the fate of the forest’s canopy, and are carried out by a slew of natural factors that might make for a gardener’s worst nightmare. Fungi, seed predators and herbivores thin out species with the densest populations of seeds and seedlings. But while most gardeners seek to cultivate a few species of carefully arranged plants, Mother Nature prefers a bit of haphazard variety in her forests. The vulnerability of seeds and young trees (think decades-old, rather than months or years) ensures that no single species grows to dominate a forest. So why is diversity important to an ecosystem? The answer isn’t so simple.

“There is not a straightforward ‘one-size fits all’ answer to that question,” Harms said. “But in general, loss of diversity from a given site leads to loss of ecosystem function at that site.”

Diverse ecosystems tend to be better at storing and recycling nutrients, breaking down pollution, and recovering from unpredictable events such as storms or fires. In short, diversity promotes some level of sustainability in an environment.

Although Connell’s research has produced plenty of significant results, Harms said the monitoring project is far from over. Green is overseeing the work as lead scientist, and hopes to pass his duties along to another ecologist when necessary. With luck, that ecologist will have the foresight to find a suitable successor, and so on.

“We would like the project to carry on indefinitely,” Harms said.