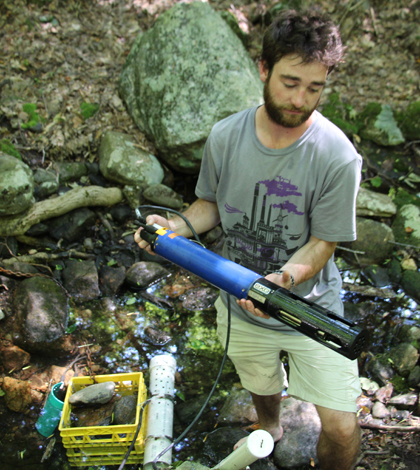 New Hampshire’s Great Bay–a recessed tidal estuary separated from the open ocean by 10 miles of land–suffers from nitrogen pollution. A cutting-edge stream monitoring network throughout one of the bay’s tributary watersheds is helping researchers and resource managers get a handle on the nutrient’s sources to better plan for how to curb them.

The monitoring stations in the Lamprey River Watershed, the largest tributary to the bay, are part of a larger, statewide “Ecosystems & Society” project, according to William McDowell, professor of environmental science at the University of New Hampshire.

“The project is designed to give insight into how land use and climate change affect stream chemistry,” McDowell said. “Ultimately, that stream chemistry represents and ecosystem service that’s valued in the region.”

The project, funded by the National Science Foundation EPSCoR program, supports around 100 stream sensor stations across the state, as well as efforts to engage citizen scientists and school teachers. Most of those stations carry sensors for stream temperature, stage and conductivity, while nine sites carry advanced instruments to track the excess nitrogen flowing off of the landscape and into the Great Bay.

Those advanced stations, which include sensors for nitrate and fDOM, cover a variety of land uses and span the Lamprey’s watershed from its headwaters to its mouth. The high-frequency data from those stations to take a closer look at where nitrate and other forms of nitrogen are entering the water, as well as what factors–like storms–influence concentrations. The continuous measurements will go a long way toward making sense of the system’s erratic stream chemistry, which varies in ways that don’t seem to respond to flow or season.

“We don’t have very many predictive tools to understand how the chemistry changes,” McDowell said. “It bounces up and down in the main river–the Lamprey–as well as in tributaries in ways that we don’t understand why.”

Many of the stations are installed on small streams, which have the advantage of draining small watersheds with clear prevailing land uses. That will help clarify the relative contributions of nitrogen from urban runoff, agriculture and residential septic tanks, for example.

But the small streams also present challenges, like finding enough water too keep the sensors submerged. “The small ones are a challenge because the sensors are not tiny,” McDowell said. “The depth for the physical placement turns out to be a real issue.” New Hampshire’s geology helps with that, providing bedrock and boulders that form pools large enough to keep the sensors under water. In addition to the effects of climate drivers and various land uses, the data will help address questions that would have been much more difficult to answer under the previous regime of weekly or monthly grab samples. Those questions include: How much nitrogen is the river sending to the bay? How long does it take a flush of nitrogen to move through the system? To what extent does nitrogen leave the system naturally before flowing into the bay.

The answers to those questions will help inform debate on how to best manage Great Bay’s nitrogen problem.

“There is a heated discussion, as there should be, about whether non-point-source reduction is appropriate and would be effective to reduce loading to the bay or whether we have to rely primarily on very expensive upgrades to sewage treatment plants,” McDowell said.