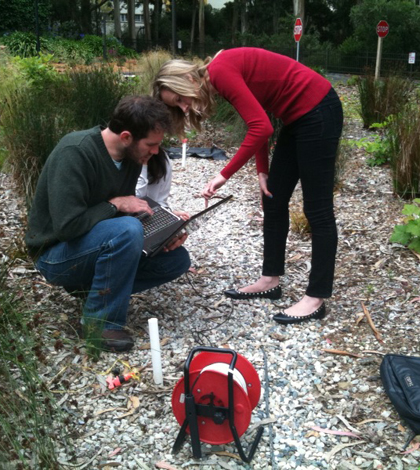 In cities across the West, stormwater managers are turning to low-impact development that trades the pavement that dominates the urban landscape for wetlands, ponds and vegetated areas that slow down and clean up runoff.

The effects of these features on water quality is well documented: Green infrastructure filters contaminants from stormwater while slowing its flow and preventing runoff from overwhelming combined sewer systems that can send untreated sewage into waterways.

These porous areas also give rainwater a place infiltrate the soil and recharge groundwater, a critical resource in the West. But those benefits are less studied, according to Jason Gurdak, an assistant professor of geosciences at San Francisco State University.

“To some extent, it’s out of sight out of mind,” Gurdak said. “It’s much easier to see and to measure surface water. It’s a lot harder to put instruments in the ground that can reliably measure recharge.”

But Gurdak and his colleagues did just that under an infiltration trench — a type of low impact development — on the San Francisco State University campus. They compared the recharge rates they measured there with rates under an irrigated lawn nearby to get a sense of how well areas of low-impact development can ferry rainfall down to the water table.

The results are published in the journal Water Resources Research.

The study is the first of its kind to combine field measurements with modeling to estimate recharge rates beneath a low-impact development feature under both current and future climate scenarios.

The researchers collected soil cores from each site to assess the sediment texture and its hydraulic properties. They also outfitted both the infiltration trench and the lawn with volumetric water content sensors, matric potential sensors, and drain gauges that collect water as percolates through the soil.

The data they collected from July 2011 to January 2012 gave them recharge rates for that period as well as a source of calibration for a numerical model. They then ran the model based on projected rainfall levels from a global precipitation model for 2099 to 2100. “It was surprising for me to see such high recharge rates,” Gurdak said. “A thousand, two thousand, three thousand millimeters per year is substantial. It’s a large rate.”

In addition to looking at recharge rates under future climate scenarios, the researches also used the model to estimate rates based on historical rainfall records. That allowed them to look at the differences between rates in El Niño years, when California tends to get more precipitation, and La Niña years, when it tends to get less.

Those simulations showed recharge rates under the trench averaged around 50 percent higher in El Niño years than La Niña years. But while the rates were higher in those years, the low-impact feature was less efficient at processing the higher volumes of water typically produced by El Niño events.

“That’s telling us that these systems aren’t really engineered properly to catch some of the more extreme precipitation events that happen during the El Niño years,” Gurdak said. “So this can help us better design low-impact design features for more extreme events.”

Climatologists are predicting El Niño will develop in 2014, which could help relieve the drought that currently blankets the parched state. It could also bring some interesting new data from the instruments that remain under the infiltration trench.

“We’ve been collecting data over a relatively dry period, and now this coming winter we’ll see a real El Niño,” Gurdak said. “I’m excited to collect some data under the real El Niño and see how the system responds.”