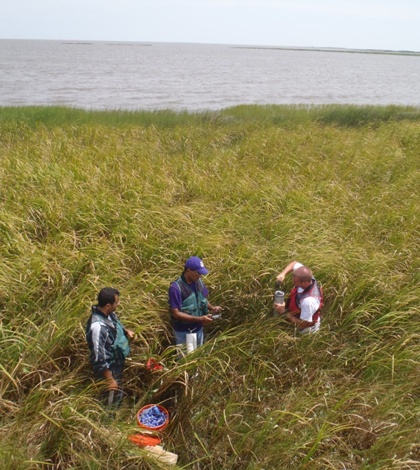 When powerful storm surge hits the Louisiana Gulf Coast, monitoring technology from a Louisiana State University research group is there to measure how the storm packs its punch and how wetlands take the hit.

Q. Jim Chen, an LSU coastal engineering professor, and his research team dynamically measure storm surge. They take wave action and coastal geometry into account, as well as water levels. Their study seeks to quench a drought of data on how wetlands mitigate storm surge.

However, he said, little field data has been collected to support anecdotes.

Most storm surge monitoring programs, including the U.S. Geological Survey’s, look solely at water level rise using gauges that measure water pressure differences, and interpret it as increases and decreases in water levels.

The method also takes coastal geometry into account.  He collaborates with a local engineering firm to survey coastal topography for his studies.

Chen said continental shelves with a narrow gradual slope and shallow estuaries, like those of New York and Louisiana, have a much higher susceptibility for flooding because high winds can more easily push shallow water ashore. Texas’ western Gulf Coast, in comparison, has a wider steeper continental shelf with much greater depth near the shore, making it much less prone to wind-induced flooding.

Hurricane Sandy’s devastating flooding on the New York and New Jersey coast is a prime example. “When you have a geometry and topography like Louisiana and New York, then it’s a different storm,” Chen said.

Chen said one of the most important takeaways for the public from storm surge research is that history cannot be forgotten, nor can science be ignored as powerful storms move toward shore.  That’s where coastal engineering plays an important role.

“We realize that a lot of damage to infrastructure, loss of property and loss of life can be avoided if we have good education and resources in coastal engineering,” Chen said.