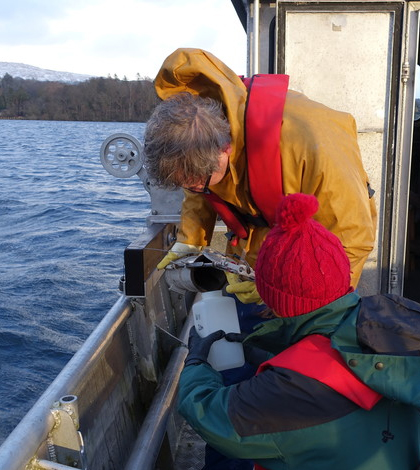 Metabarcoding of eDNA, or environmental DNA, is a very new technology and has only really been tested on a small scale in natural environments. But the technique has a great deal of potential to shake things up in monitoring biodiversity, according to a lecturer at the University of Hull.

The metabarcoding approach, instead of looking at one species using specific DNA-based procedures like typical eDNA studies, relies on a single region of DNA called a “barcode” that is sequenced simultaneously from a whole community of organisms. In a recent investigation, scientists at the university used metabarcoding on Lake Windermere, England’s largest lake, to learn more about its fish species and their relative abundance.

To see how typical eDNA techniques compared to metabarcoding, investigators had to deal with shifting weather conditions around the lake earlier this year, including blizzards. But they braved the harsh stuff and obtained more than 60 two-liter samples of the lake’s water.

The eDNA metabarcoding detected 14 of the 16 species that have ever been recorded in Lake Windermere. The most common were perch, roach, brown trout, pike, Arctic charr, bream and eel. The survey only missed the two rarest species, river and sea lamprey, but it is possible the fish weren’t present in the lake at the time of sampling. A corresponding net survey only caught four of the lake’s fish species, showing that metabarcoding can reveal more accurate results on creatures in lakes.

Lake Windermere is divided into two separate basins, the north and the south. The south basin is more rich in nutrients than the north one, and so fish species not fond of eutrophic conditions were more commonly found in the north. Other fish species without a preference were found throughout Lake Windermere.

Results of the work are encouraging, scientists say, because they help to show that metabarcoding can reliably indicate aspects of lake ecology. The approach is also more efficient and less expensive than other means.