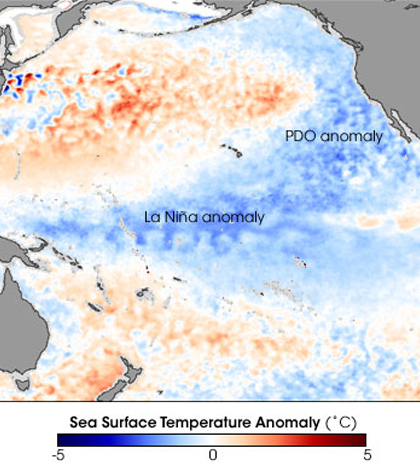 After the release of the fifth Intergovernmental Panel on Climate Change report, scientists worldwide began looking for clues to explain why global warming had steadied. That was in 2013.

But researchers with the University of Minnesota and Penn State University now say they have found the cause for the pause, according to The Guardian: natural climate fluctuations. And the bulk of those variations appear to be linked with the air-cooling effects that the Pacific and Atlantic oceans can have on the planet.

Scientists typically discuss these in terms of the Pacific Decadal Oscillation and the Atlantic Multidecadal oscillation. But for this investigation it was necessary for researchers to interpret only the portion of Pacific oscillation that is multidecadal because too much time would have been introduced in their models otherwise. In addition, scientists combined real-world observational data with climate models published in the fifth IPCC to make their findings as accurate as possible.

“We find that internal multidecadal variability in northern hemisphere temperatures, rather than having contributed to recent warming, likely offset anthropogenic warming over the past decade,” the authors write in the study published in Science.

They go on to say that this oceanic variability could easily one day make a flip to the other side of the spectrum and make man-made global warming worse. In fact, these natural cycles have flipped between warmer and cooler periods many times over the past 130 years as ocean temperatures have changed, according to Live Science. “We are in a turning point right now, and the slowdown will presumably reverse in the decades ahead,” said Michael Mann, climate scientist at Penn State University and study co-author, to Live Science. “When we do, we may see warming even faster than what the models are predicting.”

In explaining the recent global warming slowdown, scientists say the down-trending Pacific Multidecadal Oscillation appears to be the biggest contributor, according to Science Mag. Its biggest drivers are heat burial beneath the tropical Pacific as well as sustained La Niña conditions, according to a release from Penn State.

“Our study adds additional weight to the notion that this is part of a short-term excursion that is likely to reverse in the years ahead,” said Michael Mann, professor of meteorology at Penn State and study co-author, to The Washington Post. “Our findings do support the notion that the pause is likely to end and perhaps 2014 (hottest year on record) does herald that at some level.”