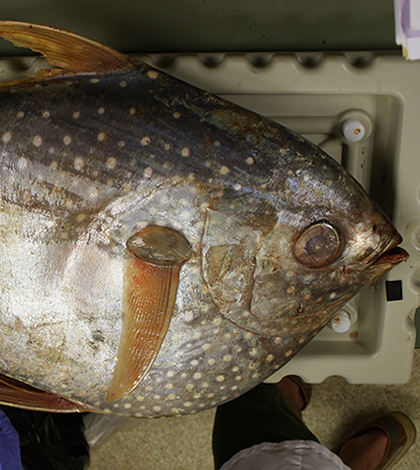 A partnership of researchers from Michigan and Hawaii fleshed out more details on how fish are exposed to mercury in a new study, according to a University of Michigan press release.

The researchers found fish that live in deeper waters usually have higher amounts of mercury inside them.  Analysis of the mercury in fish showed that it had a very similar chemical signature to mercury deposited into the atmosphere, meaning airborne mercury eventually makes it to fish habitats.

Larger predatory fish also generally have a higher concentration of mercury as they eat smaller fish contaminated with mercury.

Mercury is converted to poisonous methylmercury in the ocean. The researchers suspect that a special type of bacteria is making the toxic conversion, somewhere between 50 and 400 meters beneath the surface.

Results were published in the journal Nature Geoscience.

Image: An opah, also called a moonfish. Opah first became popular as a sushi and sashimi in the late 1980s and early 1990s and are especially popular in Hawaii. (Credit: C. Anela Choy)