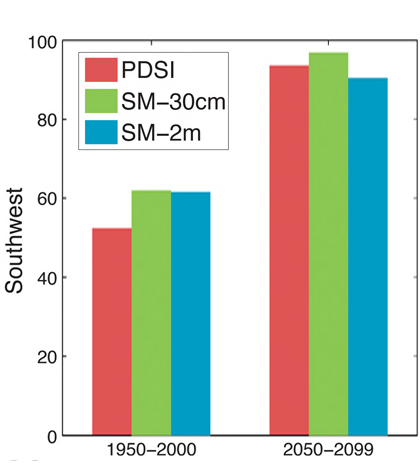 A study published in Science Advances predicts that future droughts will last much longer than originally estimated. The research compares future drought projections to records from the past 1,000 years in the U.S. Southwest and Central Plains.

The researchers from NASA, Cornell, and Columbia found that these exceedingly long droughts, referred to as “megadroughts,” are becoming more common because carbon emissions in the atmosphere are changing the climate.

The study states that the current droughts “will likely exceed even the most severe megadrought periods of the Medieval era … representing an unprecedented fundamental climate shift with respect to the last millennium.”

If the carbon levels reach 650 parts per million by 2100, as they are expected to, the researchers calculate an 80 percent chance of a multidecadal drought.

The researchers warn that “future droughts will occur in a significantly warmer world with higher temperatures than recent historical events, conditions that are likely to be a major added stress on both natural ecosystems and agriculture.”