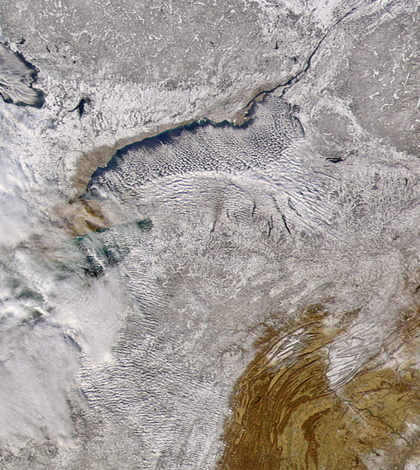 The people of Syracuse, N.Y., are no strangers to snow. In the midst of a historically snowy December 2010, the 70-some inches that fell that month barely disrupted the city’s schools or airport.

While lake-effect snow is common near other Great Lakes, the region of New York state adjacent to Lake Ontario receives more, with average annual snowfall amounts of more than 100 inches. Scientists want to know why.

“To all of the people on both sides of the border, it’s an important phenomenon,” said Bart Geerts, professor of atmospheric science at University of Wyoming. He is the lead principal investigator on one of three National Science Foundation proposals that fund the Ontario Lake-Effect Systems project (OWLeS), taking place December 2013 to January 2014.

Professors and students from nine other universities will join the research. Geerts says there is a great educational component to the study – students will be taking measurements, processing data and learning about sensor limitations and capabilities. “Not all science can be done from a computer,” said Geerts.

A key component will be the University of Wyoming’s Beech King Air research plane, which is supported by the National Science Foundation. Equipped with sensing systems above and below its wings, it assists mostly in lower atmospheric research. The King Air can collect air samples, perform chemical analyses and take radar profiles of snow storms. LIDAR on the craft will measure cloud droplets. “Not many universities have instrumented aircraft. It occupies its own niche in the lower atmosphere,” said Geerts. “It’s a national facility and can be requested by any investigator. The demand to use it exceeds capacity.”

To complement the King Air, researchers will deploy Doppler on Wheels, a fleet of radar trucks maintained by the Center for Severe Weather Research. They will also release weather balloons with attached radiosondes to measure temperature, humidity, cloud-based precipitation and the concentration of snow in the air.

“These balloons supposedly can go up to 3,000 feet if weather and the FAA permit,” said Geerts. “The interesting thing about them is that they’re aerodynamic. They maintain a constant angle and level because of aerodynamic lift.” Some snow bands that form on the eastern edge of Lake Ontario produce feet of snowfall and are so intense that they produce lightning. Geerts suspects that cooled water from Lake Ontario combines with sustained updrafts to produce them.

“Basically, we’re trying to invert the structure of the storms,” said Geerts. “We plan to actually measure updrafts with our radar.”

Studying storm structures will allow researchers to see what environmental factors contribute to the greatest amount of snowfall, the role that local terrain plays and why lightning sometimes accompanies the storms.

“We want to see how lake-effect snow bands form, see how they grow,” said Geerts. “They can shift downwind. When they do, these bands can affect areas sometimes 100 miles downwind.”