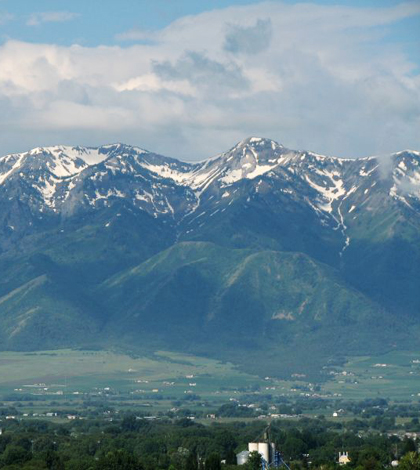 A growing population and a shrinking snowpack could complicate water supply issues for Utah, which is already the second-driest state in the country. Fortunately for the state’s managers, construction is underway on a monitoring network to better characterize water as flows down the mountains and into urban areas.

Data from the climate and water monitoring network could fill a gap in scientific understanding of Utah’s water systems, according to Joe Crawford, a research technician at Brigham Young University who is helping develop the network.

“There hasn’t been, in my opinion, nearly the amount of research that’s necessary to understand how population increase, land use and climate change are going to impact water sustainability in Utah,” Crawford said. “That’s one of the overarching questions that we’re focusing on.”

The network is called GAMUT, which stands for Gradients Along Mountain to Urban Transitions. The network falls under the iUTAH program, which is a larger interdisciplinary effort to study and protect the state’s water sustainability. The iUTAH program was funded by a $20 million grant from the National Science Foundation’s Experimental Program to Stimulate Competitive Research.

The GAMUT network is a collaborative initiative between Brigham Young University, the University of Utah and Utah State University. Each university will oversee a branch of the network that will follow a single stream from its origins in the mountains down into to the valleys where humans begin to play a larger role in the fate of the water quality and quantity.

The universities are at various stages in the process of installing multiple climate and water quality sensors along the course of their target streams. The climate stations will measure barometric pressure, wind speed and direction, air temperature, relative humidity, precipitation, snow depth, soil temperature and moisture, and solar radiation. The three streams are in watersheds at different stages of transition from rural and agricultural land uses into more urban and industrial development. The University of Utah will focus on Red Butte Creek, which flows down into the urbanized Salt Lake City. Utah State will look at the Logan River, which flows into the still-highly agricultural Cache Valley. BYU will handle the Provo River, which flows from the Uinta Mountains down into the Heber Valley. Development there falls somewhere between the other two watersheds.

“The Heber Valley is transitioning. It still has quite a bit of agricultural land, but at the same time it’s quickly undergoing a rapid transition,” Crawford said. “People are selling their farms. It’s being transformed over to a more urban and industrialized area.”

By trying to answer similar questions in watersheds of varying states of development, the researchers hope to gain additional insights into the effects of land use on Utah’s water supply.

The GAMUT network will supply valuable climate and water quality and quantity data in an understudied region that will help scientists and managers better understand and prepare for the growing demands on Utah’s water supply. But the network’s designers hope its influence will reach beyond scientists and government officials.

“I think it will be a really good educational tool that will help educate the public and let them know what we’re doing,” Crawford said. “I’ve had professors come to me and say, ‘When you have it set up, let me know. I want to take my class out.'”

Top image: The GAMUT monitoring network will track the Logan River as it flows from the mountains to the agricultural valley (Credit: Beth Woodrum, via Flickr)