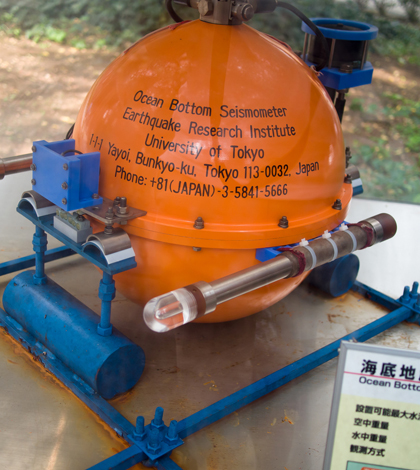 A seismometer similar to the one that washed ashore in Canada (Credit: Shusuke Kasamatsu, via Flickr)

A seismometer that captured data on an earthquake that caused a massive tsunami off the coast of Japan has been found floating in a swath of ocean debris, according to Global News. The University of Japan lost contact with the device shortly after the natural disaster began in March 2011.

A fisherman found the lost device, which appeared from faraway as a giant, orange ball. As it was deployed on the ocean floor, closer inspection revealed the seismometer was encrusted with gooseneck barnacles.

Researchers at the University of Japan are hopeful that the device contains usable data on the earthquake and events that followed. Other debris from the tsunami have been washing up on Japanese shores this year, as shifting currents and winds have brought in more than 100 cubic meters of matter.

Image: A seismometer similar to the one that washed ashore in Canada (Credit: Shusuke Kasamatsu, via Flickr)