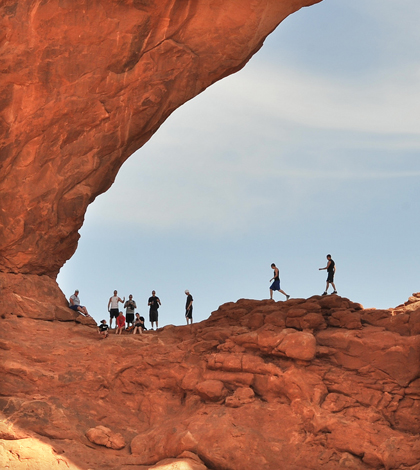 Environmental sensor networks embedded in mountain ecosystems are helping scientists learn more about the workings of water and climate. But there’s another source of  information out there that’s just as important to tap: the people who live, work and play in mountain landscapes.

“They’re observing those landscapes on a 24/7 basis,” said Courtney Flint, an associate professor of natural resource sociology at Utah State University. “They often have not only great observations of the biophysical systems, but they certainly are observing the social systems in those landscapes and have a lot to say about how they may be changing over time and where they may be headed.”

Mountain observatories track hydrology and weather across the world, and it’s rare that people aren’t a part of those ecosystems in some way or another, Flint said. In fact, they’re often an integral part of the landscape and of changes in those systems.

As scientists and governments in the western U.S. continue to plan for how to meet the water needs of a growing population in a potentially drier climate, they’ll benefit from methods that move beyond scientific knowledge and let the voice of the people in the region come to the surface.

“We’ve got tools to do this, just like we’ve got sensors to go out and measure streamflow and water quality and snowpack,” Flint said.

Those tools include interviews and focus groups, which can be paired with more “zoomed out” tools like mail surveys or census and demographic data. These methods can bring ideas to the forefront that can be integrated with physical science to understand change and opportunities and vulnerabilities in mountain landscapes, Flint said.

Flint is working to do that with a research team under the iUTAH program, a $20 million interdisciplinary research effort funded by the National Science Foundation to study and protect the state’s water sustainability.

The program includes the GAMUT sensor network, which measures hydrological and meteorological variables along three rivers as they flow from the mountains into the more densely populated valleys. There will also be a push to collect data on the social drivers of water use and management, including a survey of around 4,000 households this summer.

“We’re really trying to understand the water management structures, the organizations and institutions as well as the way people in these study areas relate to water,” Flint said. The idea is that by including more voices as early as possible in the process, researchers might be able to break up what has traditionally been a one-way conversation between scientists on one side and policy makers on the other.

By diversifying the sources of information, scientists could better tailor their research to address the obvious questions while gaining exposure to emerging issues they might not have considered otherwise.

“There are a lot of people who know a lot about how water works in Utah, and by no means are they all scientists,” Flint said. “In trying to understand the water system from s scientific standpoint, we really need to tap into the powers of observation that are out there beyond science.”