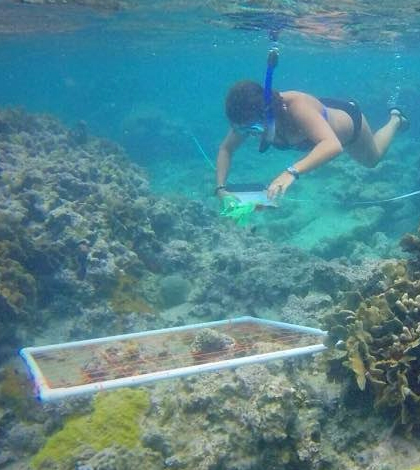 Coral reefs have a lot to deal with these days. Ocean acidification is a rising threat, as are warmer ocean temperatures. In addition, studying reefs can involve somewhat invasive methods like sensor deployments or sample extractions. But a student at Illinois Wesleyan University has found that studying reefs doesn’t have to be intrusive at all. All scientists have to do, she says, is listen.

Madz Negro, an undergraduate student pursuing degrees in music and ecology at the school, conducted an experiment on reefs near Panama’s San Blas Islands in April and May 2015. The work was part of a study abroad trip she took. Using a hydrophone, headphones and a digital recorder, she observed sounds that the reefs gave off as a means to assess their health. By employing similar methods, she says that researchers studying reefs elsewhere can rapidly gauge if they’re under stress and then shift efforts to focus on bettering their environments more quickly.

“I wanted to study the sound of coral reefs because I believe that nature is singing or giving off sound that can indicate its current state of being, just as humans do,” said Negro.

She describes the sounds that reefs give off as similar to those coming from a crackling bonfire. And it’s not just the reefs that make sound, all the creatures and activities going on around them like to chime in as well. “You listen for snapping shrimp, barnacles rasping, fish communicating, anthropogenic noises such as boats, and any other sounds present,” said Negro. Putting those all together helps to tell how well the reefs are doing, she says.

For Negro’s investigation, she compared the relationship between the sounds recorded with the amounts of live and dead coral present on each reef. Her results were quite telling.

“I ended up actually finding a correlation between the two, which was such an amazing realization! I found that the percentage of dead coral cover negatively correlated with both frequency levels and average high amplitude levels,” said Negro.

It’s important to start looking at the relationships between soundscapes and coral health, she says, because researchers can use sound as an unobtrusive way to rapidly survey reef health.

“Therefore, there will be less time spent surveying the reefs’ health, and more time spent on repairing the reef or finding ways to prevent further harm,” said Negro. “I believe that, like humans, the Earth is speaking, singing. It is making music that can indicate its current state of being. We need to start listening.”