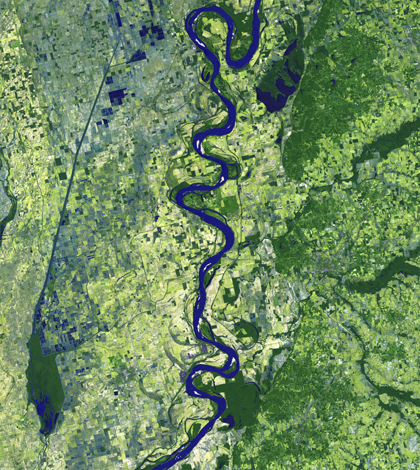 Nearly all the water running through the Mississippi River passes through filtering sediment along its banks. Though that sounds like a good thing, experts say the recent dead zones in the Gulf of Mexico signify that those natural filtering mechanisms are maxed out.

Researchers at the University of Texas used GIS software, flow modeling and third-party data analysis to find that the river’s filtration system is simply being overwhelmed by nitrates that run through it. Results of the work provide a new way to assess the interaction between surface and groundwater and may help those tracking the use of nitrogen fertilizers near the Mississippi.

“It has always bugged me that, despite what we think about rivers and their adjacent environments as nitrate buffers, substantial amounts of nitrate make it to the Gulf,” said Bayani Cardenas, associate professor of hydrogeology.

Cardenas says he wanted a physical and chemical answer to why so much nitrate was making it to the Gulf. So he and Brian Kiel, a PhD candidate in geology at the school, created models to show the interaction between groundwater and surface water along the Mississippi River.

Their models were based on river curviness, the permeability of sediment and groundwater flow toward the river. When they saw the limited buffering capacity of the river’s watershed, they were surprised and disappointed. The Mississippi River, they found, acts like a conveyor belt, transporting heavy nitrate loads right into the Gulf.

“In retrospect, this makes sense since the dead zone in the Gulf is the manifestation or end result of this,” said Cardenas.

The modeling hasn’t quantified just how overwhelmed the Mississippi is, but alleviating some of its load is almost completely out of reach because that would require increasing the residence time of water passing through sediment.

“The only way to do this is to increase the complexity of river channels,” said Cardenas. “This is a rather costly engineering feat.”