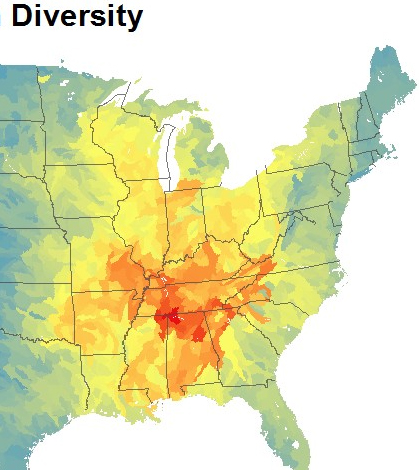 Scientists mapped biodiversity in the U.S. and across the globe. (Courtesy of BiodiversityMapping.org)

Although the U.S. has a great deal of plant and animal biodiversity, the lands the country has set aside for protection may not be the most biologically diverse areas, according to Monga Bay’s report on a recent study.

While most protected federal and state land is in the West, the most biologically diverse lands were found to be in southern Appalachia and the Southeast, where relatively little land is set aside for conservation. Excluding Alaska and Hawaii, about 8 percent of U.S. land is protected. Some of the most endemic species do not live within protected boundaries.

The biodiversity study included approximately 3,000 species across the U.S. and included plants, mammals, fish, reptiles, birds and amphibians. Scientists used biodiversity data and careful map overlays of state and federally protected lands to evaluate how well the two matched. The results showed that the biodiversity of regions in the U.S. overlap poorly with regions actually set aside for protection.

Because the primary cause of extinction is habitat loss, the study underscores the critical importance of choosing the right habitat for protection.

Top image: Scientists mapped biodiversity in the U.S. and across the globe. (Courtesy of BiodiversityMapping.org)