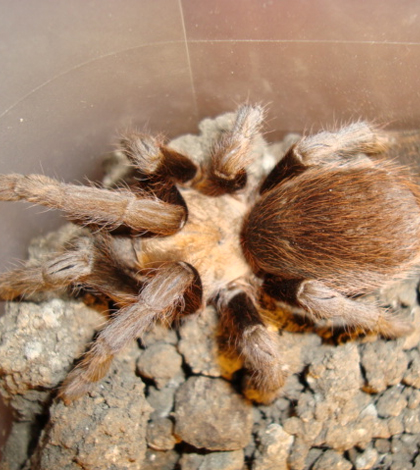 Researchers with Harvey Mudd College have found that tarantulas move faster in warmer weather, according to Uncover California. The scientists studied Texas brown tarantulas to make the find, comparing their speeds in a variety of temperatures.

The eight spiders were observed in temperatures ranging from 59 to 104 degrees Fahrenheit, with researchers noting how their agility changed. They found that the tarantulas ran faster and resorted to attack postures quicker when they were placed in hotter conditions. Tarantula speeds were 2.5 times faster at the warmest temperature than at the coldest one.

Researchers say that temperature affects the spiders’ speed because of the way tarantulas are built. Instead of moving with muscles, the spiders rely on the movement of a hydraulic fluid (their blood) in their legs.

So when the temperature-sensitive fluid gets hotter, it makes the tarantulas’ legs flex and extend more. At the lower temperatures, scientists saw the opposite effect as the fluid got more viscous.

“Hydraulic extension has its limitations,” said Anna Ahn, associate professor of biology at Harvey Mudd, to Uncover California. “And the limitations happen at the faster speeds, rather than the higher fluid viscosities.”