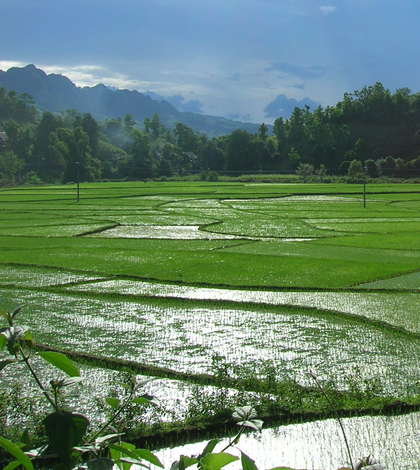 One of the study sites: a rice paddy after rainfall (Credit: Johanna Slaets)

Monitoring water quality near agricultural land helps farmers know what’s coming in and out of their fields, but many sensors and probes are expensive, or — in some parts of the world — simply inaccessible.

An international team of researchers developed a method to monitor sediment, carbon and nitrogen flows using just a turbidity sensor alone, potentially opening the door to cheaper, more efficient monitoring solutions. They conducted a study using the method in a mountainous watershed in Northwest Vietnam.

“There’s been a lot of population increase there and a lot more demand on the land, and this is leading to not-so-sustainable practices,” said Johanna Slaets, a doctoral student at the University of Hohenheim in Germany. She led the study as part of her doctoral education.

As Vietnam’s population grows, farmers are hastily plowing ancient forests into fields for corn and rice. The researchers wanted to quantify the effects of such a rapid transformation, something that Slaets said had not been done on small headwater basins in the region. To properly do so, they would need to examine the type and amount of sediment entering the watershed, as well as carbon and nitrogen levels.

While this could have been accomplished with a small suite of sensors, the researchers found that they could achieve the same results using just a turbidity sensor, using as a proxy the haziness of a fluid as measured by the reflectivity of the particles within it. A soil particle’s reflectivity is partially determined by its shape and size, two features that also indicate its composition, whether silt, sand or clay. Calibrating the turbidity sensor’s signal allowed the researchers to measure carbon and nitrogen, too.

The study took place over two rainy seasons in 2010 and 2011. The researchers only took samples during periods of rain to obtain the best runoff readings. When the weather was dry, the researchers were left to read meters and wait for a shower. This requirement, Slaets said, made the fieldwork a particularly unique experience.

“Whenever it’s raining, you go out to the field and try to take a sample,” she said. “It sounds exciting, but most of the time it means you spend a lot of time on the balcony looking at the clouds, hoping that rain will come.”

A collection of samples from a single rainfall event (Credit: Johanna Slaets)

“The whole storm-based thing is kind of challenging because you end up rushing out at lunch — or 6 a.m., when one of your colleagues wakes you up and says, ‘It’s raining, it’s raining!’” Slaets noted that some of the locals found humor in announcing a rain shower when there wasn’t one, sending the researchers into a scramble that would inevitably end in disappointment.

The need for rain wasn’t the only challenge, Slaets said. Lack of infrastructure made traversing the rugged terrain difficult. Motorbikes served as the primary mode of transportation between sample sites, and equipment breakages were not uncommon on the bumpy rides.

Furthermore, frequent power outages put the samples at constant risk, as they had to remain frozen until the researchers could bring them to Hanoi for analysis. Slaets said the method outlined in her research could be valuable in many applications, from freshwater eutrophication to the study of nutrient depletion in upland areas — any situation where turbidity, nutrient and sediment information is necessary.

“That’s the great thing: you need the same sensor,” she said. “Everyone knows we have limited time, we have limited budget, so the more you can measure with one sensor, the better.”

Top image: One of the study sites: a rice paddy after rainfall (Credit: Johanna Slaets)