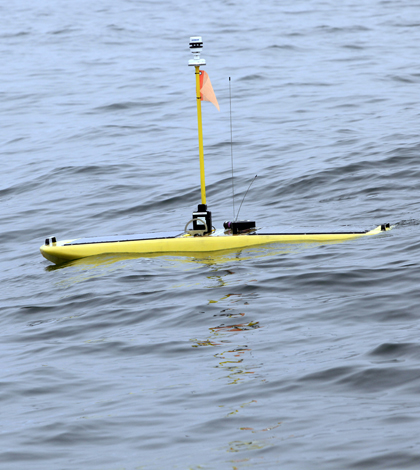 A new generation of sea-faring robots could soon roam the oceans where marine life congregates, listening for the pings emitted from tags carried by big fish like sharks and tuna.

The tags are attached by scientists that study population dynamics and how a changing ocean effects the shape and timing of migrations. A leader in that effort has been the Stanford University laboratory run by Barbra Block, professor of marine sciences and evolutionary, cellular and molecular physiology.

The Block lab is especially interested in large fish like sharks and blue-fin tuna that, unlike most “cold-blooded” marine animals whose body temperatures are regulated by the surrounding environment, maintain a warmer and more consistent body temperature. That allows them to exploit a much broader section of the ocean, according to Randall Kochevar, a marine biologist with the lab.

For the past three years, the lab has worked with Liquid Robotics, the developer of the Wave Glider, to free the listening devices that detect tagged animals from the shackles of ocean moorings that are stuck in one place. A few years of testing show that the Wave Glider — the world’s first wave-powered autonomous marine robot — could play an important role in a marine wildlife monitoring network.

The movement to build sun a network gained momentum in 1999, when the Census of Marine Life came to the Block lab and asked what tagging could contribute to their mission of understanding the abundance and diversity of ocean wildlife. That led to a consortium of 75 scientists that applied more then 5,000 tags to 23 species in the North Pacific over the course of 10 years.

“We tagged all kinds of things,” Kochevar said. “Whales, sea birds, turtles, tunas, sharks, seals and sea lions, anything you can imagine. All of these top-level predators.” The tags compiled 35,000 days of tracking data that helped the researchers identify the hotspots where many species congregate at certain times of the year. One of those critical habitats was the West Coast of North America, where species from all over the world come to feed during the productive fall upwelling season that brings nutrient-rich waters from the deep ocean up onto the continental shelf.

The species found gathering there include salmon sharks tagged in the Gulf of Alaska; leatherback sea turtles tagged on their nesting beaches Indonesia; sooty shearwaters tagged in New Zealand; and blue whales that spend the winters down in the Sea of Cortez. In addition to showing hotspots and revealing that some marine species cover large swaths of the ocean throughout their life histories, the data showed the researchers a rich ecosystem with abundant apex predators. Unlike many of the planet’s large-scale ecosystems, here was one that was largely in tact.

“You can imagine it’s like when Lewis and Clark first saw Yellowstone,” Kochevar said.” There’s all this wildlife and all these different kinds of animals. We felt a bit like that, like early explorers.”

That led to them to ask what they should be doing to preserve the integrity of the biodiversity that makes use of the North American coast. A logical first step is to monitor these species, but that’s not easy, and it’s certainly not cheap. The satellite tags, which continually broadcast location data back to researchers, run around $3,000. That’s manageable for a one-time tagging bonanza like the effort spurred by the Census of Marine Life. But it’s cost-prohibitive to base an ongoing program on those instruments, Kochevar said.

The downside of hydrophones is their locations are generally fixed. If researchers want to know about the animal activity in another spot, they’re out of luck unless they can fund a new mooring. That’s where the Wave Gliders came it. Kochever said Liquid Robotics was interested in testing tag-detecting application in which the robot, which can be deployed for months at a time, carried a hydrophone instead of its physical and chemical sensors. And the Block Lab was interested in the question that moored hydrophones couldn’t answer: What about that spot over there?

Over the course of three tests in the California Current from 2011-2013, the hydrophone-equipped Wave Gliders logged more than 2,300 detections from tagged animals including white sharks and chinook salmon.

“The tests were just incredibly successful,” Kochevar said. “We can tell it, ‘Go to that island and make a couple laps around it, or spend some time cruising up and down this coastline,’ just listening to see if we pick up any tagged animals.” Kochevar said the Wave Glider gives them a new arrow in their quiver as they start thinking about how to wire up the ocean and build a monitoring network to track the comings and goings of wildlife across the large areas of the ocean where animals congregate.

Th next step, he said, is to get funding to try this in different places with different instrumentation. In the short term, that could include adding a standard suite of oceanographic sensors to the hydrophone payload. Looking to the future, it could include sensors for on-board DNA analysis that could identify the plankton in the water near tagged animals.

“Part of the revolution that we’re going to see is not just the invention of new technology, but the tying together of lots of existing technologies in new and creative ways so that not only are we monitoring the coming and going of animals but we’re doing it in the context of the physical and chemical oceanography,” he said. “Understanding not only what these big animals are doing but also understanding what those forces are that are driving those behaviors”