While some nations cut carbon emissions, others threaten to undo global progress 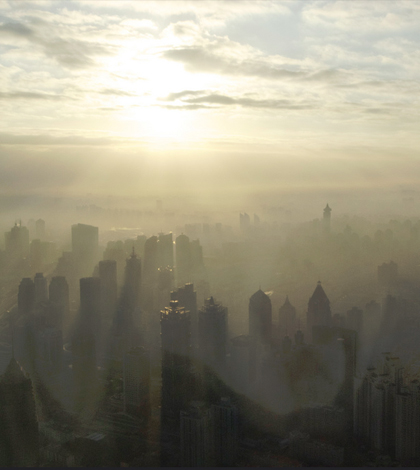 It’s too late. So warned a report by the World Bank Group on impending, irreversible climate change last fall. The report says that the world’s governments can do nothing to prevent a 1.5 degree Celsius rise in global temperature over the next couple decades. That figure could increase to 4 degrees by the end of the century if steps to reduce carbon emissions are not undertaken immediately.

That 1.5 degree jump doesn’t sound like much, but the report insists its impact will be resoundingly clear 20 years from now.

More frequent and more severe droughts, less methane-storing permafrost, increasingly unpredictable weather patterns and a host of agricultural issues are all potential prizes to be claimed from this greenhouse grab-bag. Not to mention sea level rise and levels of ocean acidity that could cut commercial fishing catches by 50 percent.

Important players on the world stage have set goals to reduce emissions, but others still have refused to participate. Some governments have even revoked their own carbon-cutting policies. And just about every nation continues to expend resources on the acquisition of fossil fuels such as coal, more than 80 percent of which can’t be used if the UN’s 2 degree Celsius goal is to remain viable.

Governments that refuse to abide by international carbon emissions standards often cite expense or trade-offs to economic growth. India, a nation still finding its footing as a developing superpower, has made clear that it intends to ramp up coal power production from 156 GW this year to 677 GW in 2035. The move is part of a push to bring modern energy service to the 700 million people there without it. India refers to its neighbor, China, as an influence, due to the country’s use of coal power to bring 650 million people out of poverty since 1990.

But China’s efforts have come with a price. Nearly half a million people die each year from complications related to China’s horrific air pollution, and the nation’s agriculture faces conditions “somewhat similar to a nuclear winter,” as put by associate professor He Dongxian of China Agricultural University. These factors likely influenced Chinese president Xi Jinping to sign a deal with President Obama last fall agreeing to cap carbon emissions by 2030 or earlier. While India has said it couldn’t hope to make such an arrangement without significant technological aid from developed countries, some analysts project that its intended coal usage alone could derail current global climate goals for the rest of the world. Australia is another major power that has prioritized economic development above global emissions goals. Last summer, the island nation became the first developed country to repeal carbon laws that taxed greenhouse gases. At 108 pounds of daily carbon emissions per person, Australia sits four times higher than the global per capita average — just ahead of the U.S., and just behind Saudi Arabia. The decision came amid public outcry against the carbon taxes, which were blamed for increased energy and living costs following the global recession in 2008.

With one of the world’s biggest polluters on track to pollute even more, and the second-largest nation basing its economic growth on an unsustainable fuel source, are the efforts of other national governments worth more than mere political posturing?

Every action taken to reduce carbon emissions today can be seen as an investment in the future. In fact, this actually translates to real savings: The International Energy Agency projected that for every dollar spent toward cleaner technology rather than fossil fuel before 2020, $4.30 is saved on dealing with the effects of carbon emissions after 2020. Many governments are working to ensure that things don’t get worse — for either the global economy or the environment.

In March, President Obama signed an order that aims to cut emissions from the U.S. government by 40 percent in 10 years. The federal government accounts for a mere 0.7 percent of the country’s emissions, but it is the largest consumer of energy in the U.S. Additionally, several major private-sector corporations with federal ties have agreed to cut emissions by 5 million tons by 2025.

The European Union, producer of about 10 percent of global greenhouse gas emissions, has taken major steps to reduce emissions since 1990, and is on track to meet internal and international reduction targets by 2020 — all while maintaining 45 percent GDP growth between 1990 and 2012. When faced with the risk of failing to meet its target, Germany announced a plan to crack down on aging coal plants and fine excess carbon dioxide production by the ton. And the UK surpassed expectations last year by cutting carbon emissions by 8 percent and boosting renewable energy to account for one-fifth of the country’s total production.

Mexico has promised to cap carbon emissions by 2026; an unprecedented pledge among developing nations. And the Philippines, one of many southeast Asian nations likely to suffer disproportionately from rising sea level, has agreed to commit to carbon reductions by December, even if it means taking a hit to GDP.

It’s easy to have a bleak outlook on the Earth’s climate when one government’s environmental policy seems to counter that of another. But the cooperative work of nations and international entities can shine a little light on an otherwise dark future. A 1.5 degree increase in global temperature may already be unavoidable, but there could still be time to keep this planet from getting any warmer.