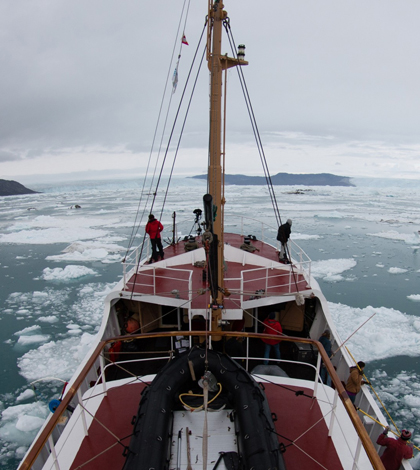 Researchers at multiple universities and NASA have uncovered the rapid shrinking of an ice sheet in Greenland using technology from the space agency. This shrinking, they say, could add more than a meter to global sea levels if the ice sheet melts completely.

The ice sheet of interest, called Zachariae Isstrom, has been studied for decades. Scientists at NASA have used highly sensitive radar sounding equipment, gravimeters and laser profiling systems mounted to airplanes to dissect its shifts.

Flights of those instruments have been carried out alongside analysis of optical images from satellites to monitor and record changes in the shape, size and position of the glacial ice sheet over long periods of time. Images from foreign satellites were also used, as scientists tapped those under the purview of the Canadian Space Agency, European Space Agency and others.

By comparing data collected by the instruments during NASA’s Operation IceBridge and older NASA missions over Greenland, scientists involved in the effort have found that the Zachariae Isstrom ice sheet has become unmoored from a sill that was previously helping to stabilize it.

This detachment, in combination with the ice sheet’s downward-sloping position in relation to the sill, researchers say, is contributing to the ice sheet’s rapid disintegration. In terms of human time, the melting is not that fast, on the scale of decades to a century. But when considered in the realm of glaciological time, the shifting is actually quite sudden.

Shrinking of the ice sheet is further quickened by the existence of a feedback loop researchers discovered in the analysis. They have found that Greenland’s ice melt is also accelerating because warmer ocean waters are hitting submerged glacier faces below colder, freshwater surface waters. When the marine waters shoot upward, they bring heat to larger portions of the glacier, increasing the rate of melting. In a similar vein, scientists say that fjords holding Greenland’s glaciers are actually much deeper than once thought, sometimes as much as 2,000 feet, which means there is a greater likelihood that warmer marine waters can work their way in.

In addition, the below-ice-sheet factors are compounded by air temperatures that have steadily increased over the years. Put together, researchers call the combination of increased heat above and below the sheets an attack at both ends that has helped the sheet to recede.

This recession has placed Zachariae Isstrom’s grounding line — the boundary between land and sea underneath a glacier — at its terminus. In other words, the ocean is right up against the portion of the glacier that is grounded.

And so it is that calving off the front of the glacier into the ocean now accounts for most of the losses in ice mass that it sustains. This is highlighted by a glacier nearby with an equal amount of ice, called Nioghalvfjersfjorden, that is more advantageously positioned. It is placed on an uphill bed that has helped to protect it from ice losses similar to those sustained by Zachariae Isstrom.

Some of the effects that the glacier melt could have include the predicted, and substantial, rises in global sea levels. But from there, they include all the damage that higher seas could inflict on coastal areas of the world. Researchers guess that these impacts could include the loss of land and property in coastal cities, as well as the mass displacement of possibly millions of people.

In a specific estimate, scientists predict that 39 inches would be added to global sea levels if both the Zachariae Isstrom and Nioghalvfjersfjorden ice sheets melted. They are continuing their studies into both sheets through funding provided in part by NASA’s Cryospheric Sciences Program.