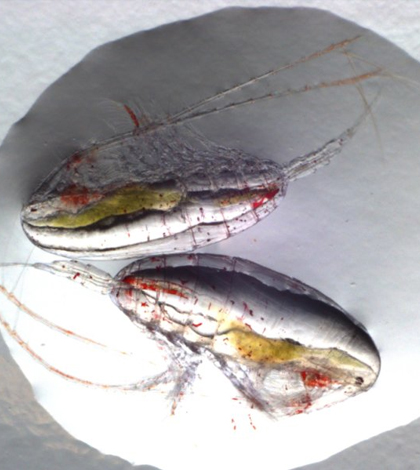 Calanus finmarchicus is one of the most abundant copepod species in the North Atlantic and is extremely important to the food web. (Credit: Sigrun Jonasdottir / DTUAqua)

Tiny copepods have a big impact on carbon dioxide uptake in the ocean, according to new research led by scientists at Technical University of Denmark. Though they are no bigger than grains of rice, their vast numbers add up to a large movement of carbon dioxide from the ocean’s surface to the ocean’s depths where the carbon dioxide can be stored for thousands of years.

Researchers discovered that when they considered the migratory cycle of the zooplankton, it became apparent that while the zooplankton lingered on the ocean’s surface in the summer, they dived deep in the winter and hibernated in the depths, taking all the carbon dioxide they had picked up from the atmosphere with them. Deep under the ocean’s surface, there is very little carbon exchange, meaning the carbon dioxide they took with them would not return to the surface for thousands of years.

Computer models of climate change typically do not include the effects of copepod migration on ocean carbon sink capacity, which scientists now realize is a significant oversight. It is estimated copepods transport 1 to 3 million tons of carbon into the deep ocean every year.

Top image: Calanus finmarchicus is one of the most abundant copepod species in the North Atlantic and is extremely important to the food web. (Credit: Sigrun Jonasdottir / DTUAqua)