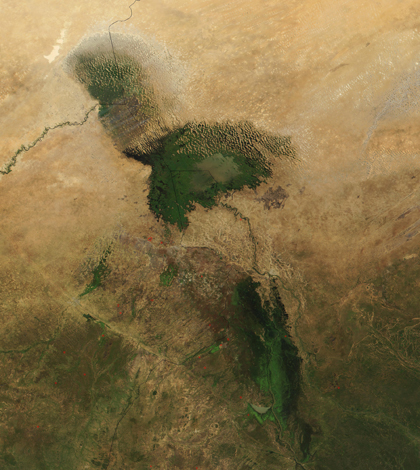 Scientists now know that much of the African drought in the 1980s was partly due to pollution that traveled from the Northern Hemisphere, according to a release from University of Washington. The drought was severe enough to cause Lake Chad to very nearly dry out.

At the time, Lake Chad’s problems were blamed on overgrazing and poor farming practices. But experts now say that aerosols emanating from U.S. and European factories influenced tropical rain bands, causing them to no longer reach the area.

Following clean-air legislation, scientists say the rain bands shifted back, causing the drought to lessen. The University of Washington researchers used historical observations and multiple climate models to determine why the global shift in rainfall occurred.

Image: An image of the dwindling Lake Chad captured by the MODIS satellite in 2001 (Credit: NASA)