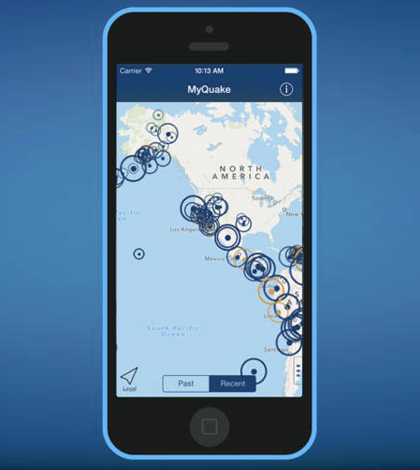 MyQuake smartphone app. (Courtesy of the University of California Berkeley)

A new app being developed by the University of California Berkeley could make it possible for phones to detect earthquakes and alert people to get away from unstable structures such as buildings or bridges.

The app, called MyShake, ideally will be programmed to relay signals from sensors at locations around the state to phones to alert people of even the tiniest of rumbles. Then users can find safety. Advance alerts could also allow for halting trains entering at-risk tunnels, opening firehouse doors and even sending reports to hospitals. First responders and government agencies would be able to warn the public faster than ever before.

But, the app has some pitfalls. The team developing it said that phones do not have as strong of a signal as seismometers and it will take hundreds of sensors to make them work similarly. Cell phones also can’t tell the difference between an evening jog and a 7.2-magnitude quake. So the team is working on an algorithm that will recognize the difference.