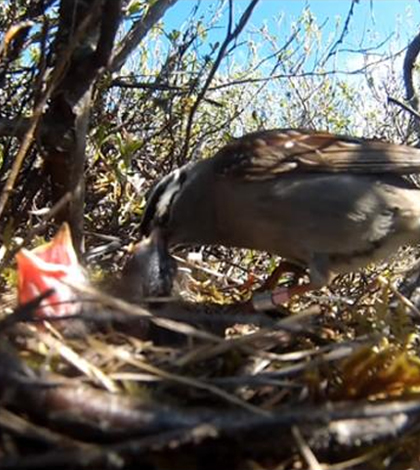 Arctic songbird nestlings struggle in cold, wet years, but the changes forecast by climate models may lead to even more challenging conditions, according to new research from scientists at the University of California, Davis.

Researchers at the university compared the growth rates of the nestlings of White-crowned Sparrows, which have a broad breeding range, with those of Lapland Longspurs, which are Arctic breeding specialists. The scientists predicted that nestlings would grow faster in warmer, drier conditions; that clutches laid earlier would do better; and that the nestlings of specialist longspurs would grow faster than the generalist sparrows.

Researchers found that growth rates were higher overall in 2013 than in 2014, when the weather was colder and wetter. There were also fewer arthropods, the birds’ food source, available in 2014. Longspur nestlings grew faster than sparrow nestlings both years, but sparrows were unaffected by temperature, perhaps because sparrows nest in shrubs rather than on the open tundra. Nestlings from clutches that were laid earlier did grow faster than those from later clutches, since birds that arrived on their breeding grounds early could claim the best territories for raising young.

The results foretell challenging breeding conditions for the birds going into the future, scientists say. While warmer temperatures may favor nestling growth rates, climate models predict more storms and precipitation that could be detrimental.