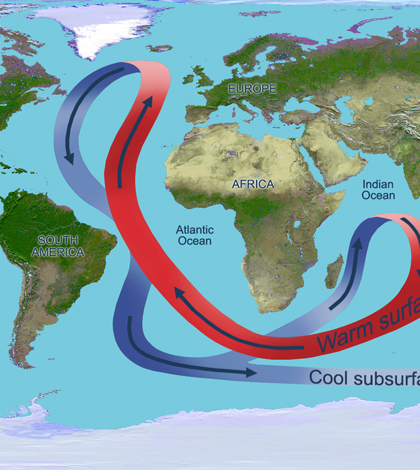 A depiction of the global ocean circulation. In the Atlantic Ocean, warm water travels north at the surface, while cooler water travels south at depth. (Credit: NASA / Public Domain)

The Atlantic Ocean’s overturning circulation is slowing down. But its pace is proceeding sluggishly, according to the results of a study led by scientists at the University of Washington.

The study looked at data from satellites and ocean sensors off Miami that have tracked the Atlantic overturning circulation for more than a decade. Together they show a definite slowdown since 2004, confirming a trend suspected before then from spottier data.

Looking at other observations to determine the cause, researchers ruled out what had been the prime suspect until now: Massive melting and freshening in the North Atlantic could stop water from sinking and put the brakes on the overturning circulation, which moves warmer water north along the ocean’s surface and sends cold water southward at depths.

Instead, the authors saw a surprising connection with a current around the southern tip of South Africa. In what’s known as the Agulhas Current, warm Indian Ocean water flows south along the African coast and around the continent’s tip toward the Atlantic, but then makes a sharp turn back to join the stormy southern circumpolar current.

Warm water that escapes into the Atlantic around the cape of South Africa is known as the Agulhas Leakage. The new research shows the amount of leakage changes with the quantity of heat transported northward by the overturning circulation. The finding could have implications for northern European and eastern U.S. climates, and for understanding how the world’s oceans carry heat from the tropics toward the poles.

The study was funded by NASA and the U.K.’s Natural Environment Research Council. Full results are published in the journal Geophysical Research Letters.