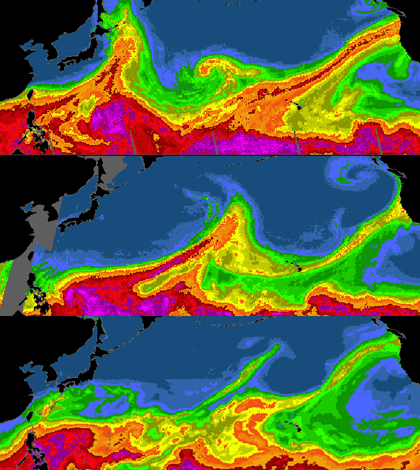 In a pair of studies, scientists at the National Center for Atmospheric Research (NCAR) show that an improved Community Climate System Model does a better job of simulating atmospheric rivers than other lower-resolution models. Using an updated version of the model also did a good job of predicting when the rivers make landfall.

The rivers, which are large bands of moisture that circle the planet within clouds, can unleash drenching rains when they crash onto land. Because the downpours can alleviate droughts or cause damaging floods, scientists are highly interested in how their frequency, intensity or paths may be altered in a future of predicted climate change.

Standard-resolution climate models have had difficulty realistically simulating atmospheric rivers and their impacts in the past, so the researchers wanted to see if they could find a better way. Using a version of the NCAR-based Community Climate System Model 4.0 with a resolution twice as high as normal, they found that it was possible to capture landfall frequency over the last century. The model was also able to pinpoint landfall locations and related storms.

Investigators were also able to use the updated climate model to project that Pineapple Express storms on the U.S. West Coast could linger and intensify if greenhouse gas emissions aren’t reined in. The storms are associated with atmospheric rivers and usually carry moisture with them from Hawaii.

The climate model also showed that future changes to atmospheric rivers in general will likely be most dependent on how jet streams change in a warming world. Alterations to the streams could mean a possible increase in the number of storms that make landfall in Southern California.

Atmospheric rivers hitting California appear to be most influenced by changes to the subtropical jet, researchers note. Those hitting the United Kingdom are influenced more by the polar jet.

Two papers covering their findings were published July 28 and Aug. 25 in the journal Geophysical Research Letters.