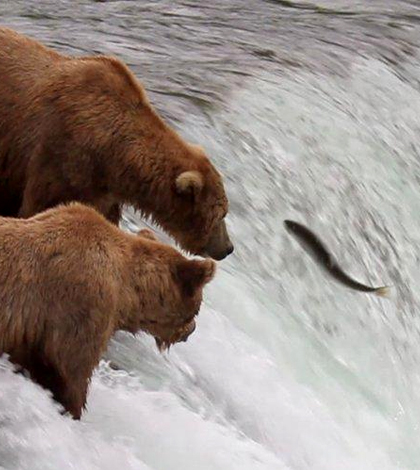 Much of our time these days gets devoted to staring at screens. Our laptop or tablet computers we lug everywhere, the cell phones in our pockets and the televisions in our homes — it seems difficult to unplug from it all.

This connection with the virtual world that we have is one thing that researchers at Kansas State University are looking to dissect in a recent work. They are looking specifically to compare the responses of people viewing bears through a bearcam at Katmai National Park with those of park visitors who see the creatures live.

There are several questions investigators are seeking to answer. One, how does viewing the creatures virtually impact relationships that webcam watchers have with nature? How do their reactions compare to park visitors who saw the bears in person? And, later on, is there a discernible difference between the conservation actions taken by members of the two groups?

To get at the answers, the researchers ask online viewers to fill out a survey after they’ve watched the Katmai bearcam. Investigators also have spent several days interviewing park visitors in person for comparison.

Both sets of questions used are exactly the same, and they cover topics such as conservation caring — a scale that shows a person’s connection with nature — and environmental psychology theories that determine if a person holds core values around preserving wildlife.

The survey also looks for new ways for parks to use web-based technology to engage global audiences. For example, the research could help park managers develop ways for virtual viewers in Brazil to engage in conservation efforts that help the brown bears at Katmai National Park.

The project was launched in the spring with help from explore.org, an organization that hosts live video streams of nature in action around the world. Plans are to continue the efforts through the next few years, and switch up animals showcased from bears to giraffes, elephants or birds.