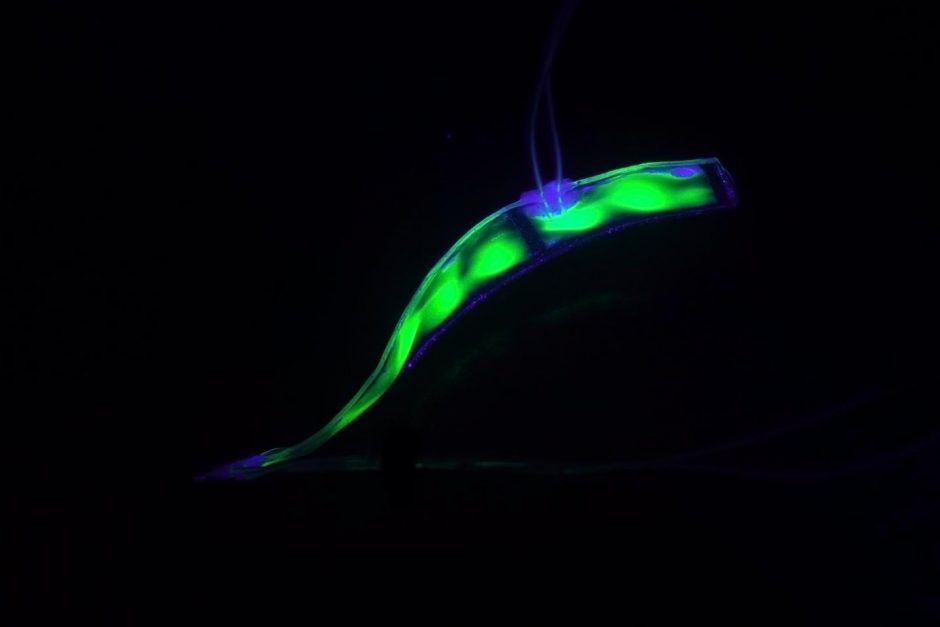 The conductive chambers inside the robot's artificial muscles can be loaded with fluorescent dye (as shown in the video accompanying the study and this release). In the future, the fluorescence could be used as a kind of signaling system. (Credit: University of California San Diego, https://www.eurekalert.org/multimedia/pub/168795.php?from=391968)

Like a strangely plump, foot-long, glowing ribbon, a translucent soft robot is swimming silently through saltwater tanks in California. The robot is a product of the Bioinspired Robotics and Design Lab within the UC San Diego (UCSD) Jacobs School of Engineering.

“This design was inspired by the eel larva, also known as leptocephalus,” UCSD engineering PhD student Caleb Christianson explains to EM. “These eels are transparent and are able to swim silently through the water.”

The robot is 22 cm long, 5 cm tall, and 1.5 mm thick. Instead of using an electric motor to propel itself, the robot moves using water-filled artificial muscles and an electronics board that stays at the surface of the water. “It has six artificial muscles (based on dielectric elastomer actuators) in it that we activate in a controlled sequence with a microcontroller,” adds Christianson.

Most robots deployed in the world’s oceans today are like tiny submarines, rigid and moved by propellers, relatively noisy for marine creatures. This technology represents a step away from this kind of intrusive monitoring.

“Two key advantages of soft robotics over traditional, rigid robots are their improved safety and adaptability,” details Christianson. “When working around fragile objects or living creatures, soft robots provide a safer alternative because of their inherent compliance. In addition, since they are flexible, they can more easily adapt to changing, uncertain environments.”

The research is also unique in its incorporation of the environment into the robot’s design: the salinity of the water is what helps the robot generate power to move. Cables feed voltage to both the pouches of water inside the robot’s artificial muscles and the salt water it’s immersed in. The muscles activate when the robot’s electronics deliver positive charges inside of the robot and negative charges in the water around it; the muscles bend, causing the robot to swim with an undulating movement. 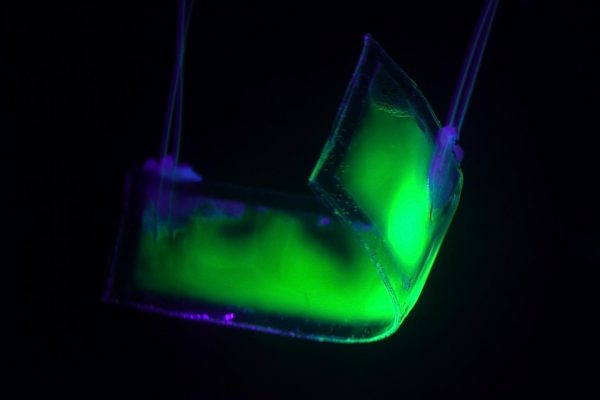 Instead of propellers, our robot uses soft artificial muscles to move like an eel underwater without making any sound. (Credit: University of California, San Diego, https://www.eurekalert.org/multimedia/pub/168796.php?from=391968)

“The microcontroller sends a signal to high voltage converters, which put out 7.5 kV across each of the muscles, with respect to the outside water which is grounded,” Christianson clarifies. “Despite the high voltage, the actuators work at very low current, which allows them to be used safely. While many other researchers use an opaque conductive material for the electrodes (e.g., carbon grease or carbon nanotubes), we use water, which is conductive enough to charge and discharge the actuators.”

Other researchers have created robots using similar technology, but always with semi-rigid frames inside to maintain tension to power the robots. This study proves that a much softer robot is possible since the frames are not needed.

“The artificial muscles that we use in this robot are called dielectric elastomer actuators,” states Christianson. “These are essentially stretchable capacitors, in which two parallel conductive materials sandwich a non-conducting, elastomeric (rubber-like) layer. One way to improve the performance of these actuators is to pre-stretch the dielectric layer, which requires the use of a rigid frame to hold that pre-strain. This imparts some amount of rigidity to the structure. In our design, we use non-prestrained elastomers, which means that the entire structure is soft.”

Since the team is using water and transparent dielectric elastomers, the entire structure is translucent.

“This allows the robot to have ‘passive camouflage,’ which allows it to blend into the environment naturally,” adds Christianson. “It also enables us to use different dyes in the fluid electrodes, such as the fluorescent dye shown here.” 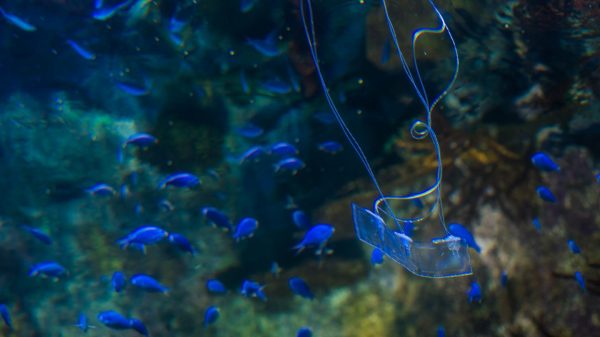 Researchers tested the robot in tanks at the Birch Aquarium at the Scripps Institution of Oceanography at UC San Diego. (Credit: University of California, San Diego, https://www.eurekalert.org/multimedia/pub/168797.php?from=391968)

In fact, one future application may involve filling the conductive chambers within the artificial muscles with fluorescent dye for signaling. The fluorescent dye is what causes the glow in some images of the robot.

“It was recently found that certain eels will fluoresce,” Christianson describes. “While the real reason for the fluorescence is up for debate, one purpose may be to help the eels locate each other during full moon spawning events. Since it’s challenging to use radio waves for communication underwater, an alternative may be to use some sort of visual signaling. In this paper, we’ve demonstrated that the approach is feasible but the implementation and development is reserved for future work.”

Also coming in the future for the research team will be increasing the robot’s lifespan, equipping it with sensors, and enabling it to dive deeper.

“Improvement of the fabrication approach to increase the lifetime of the robot is reserved for future work, as is further optimization of the artificial muscles (e.g., their geometry) and their actuation sequence based on the natural motion and performance of the eel,” remarks Christianson. “In this work, we have only tested in aquariums. Development of a robust ballast system for deeper dives is reserved for future work, but may involve the addition of weights or air bladders depending on the desired depth and the relative densities of the materials.”

Eventually, the researchers anticipate housing a suite of sensors in the robot’s head—and maybe in different locations on its body.

“It seemed to me to be a natural choice since many creatures have sensors (e.g., eyes, ears, nose, etc.) in their head,” states Christianson. “There is also merit in distributed sensing, which will need to be explored in future work. We have not yet explored which sensors to include, which should be based on the needs of those who are interested in underwater exploration.”

Ultimately, that’s the hope of Christianson and the research team in a nutshell: an innovative soft robot that can be put to many different monitoring uses in the oceans.

Top image: Instead of propellers, our robot uses soft artificial muscles to move like an eel underwater without making any sound. (Credit: University of California, San Diego, https://www.eurekalert.org/multimedia/pub/168796.php?from=391968)