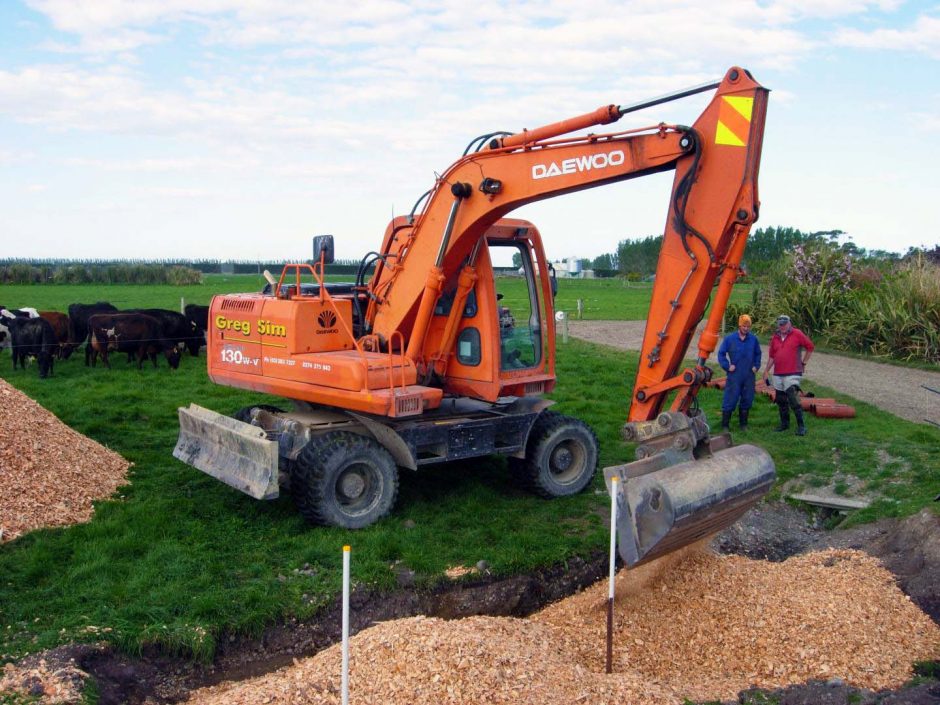 The term “bioreactor” might conjure up the image of a reactor that initiates and sustains some sort of mysterious biological chain reaction using biological fuel rather than splitting atoms. In fact, a bioreactor is any system engineered to support a biologically active environment. In the case of the Chesapeake Bay Watershed, ditches holding woodchips that enhance the natural denitrification process are bioreactors, and they are helping to remove excess nitrogen from agricultural runoff to protect the watershed.

Laura Christianson, an assistant professor at the University of Illinois, corresponded with EM about the research. Christianson and her research team study how effectively various kinds of bioreactors remove nitrogen from water. While they are already used often in the Midwest, the team wanted to test bioreactors in the Chesapeake Bay watershed.

“Denitrification happens naturally in soils all around the world,” details Christianson. “In a field, this process needs carbon, which our Midwest soils are typically high in, and the field needs to be saturated. In a bioreactor, we simply borrow this idea and design the bioreactor to maximize this process. By adding woodchips, we give the natural denitrifying bacteria even more carbon than they would ever have access to in the surrounding soil. These bacteria only do their job under saturated conditions, or low oxygen conditions, so we use control structures to hold the water long enough within the woodchips to allow these conditions to develop and give the bacteria sufficient hydraulic retention time—enough time to do their job.”

These mini nitrogen processing plants are perfect for cleaning water of nitrate because the carbon-rich woodchips give natural bacteria that do the cleaning plenty to eat.

“The woodchips serve as a carbon source for the denitrifying bacteria,” Christianson describes. “Just like us, these little guys eat carbon. It is likely that other bacteria and fungi are involved in breaking down the complex carbon molecules inside the woodchips to make them suitable as ‘food’ for denitrifying bacteria, but that is still an area of current research.”

The bacteria don’t suck the nitrogen from the soil, either, which is important to maintaining its agricultural value. Nitrogen-rich soil is naturally good for growing crops, and of course fertilizer and manure add nitrogen to the mix as well. But because the trenches filled with woodchips are far more appealing to denitrifying bacteria, the bioreactors prevent the soil from losing too much nitrogen while protecting the water from gaining too much. The research team observes the construction of one of the bioreactors in the Chesapeake Bay. The woodchips accelerate bacteria’s natural process of taking nitrogen out of the water. (Credit: Laura Christianson)

“These denitrifying bacteria are just like humans who have to eat carbon to fuel our breathing process,” adds Christianson. “However, rather than breathe oxygen in and exhale carbon dioxide like us, these bacteria are able to essentially ‘breathe’ nitrate molecules in and exhale dinitrogen gas. Dinitrogen gas forms 78% of our atmosphere, and it is stable and benign—it is not a greenhouse gas.”

“Denitrifying bacteria are so abundant and resilient, harmful bacteria don’t outcompete them inside a bioreactor,” remarks Christianson. “One exciting note is that some real ‘baddies’ like E. coli might actually be removed by woodchip bioreactors, thus potentially giving bioreactors an additional purpose beyond simply cleaning nitrogen from water. This is still an area of very early research, so we can’t say much yet, but it’s promising!”

A (relatively) simple solution to a complex problem

Although it may seem that simply reducing fertilizer use will solve the problem of nitrates in water, this oversimplified view misses the mark.

“Our soils and fields in the Midwest are naturally very rich in nitrogen thanks to the millions of years of prairie that previously grew here,” states Christianson. “Thus, some of this natural nitrogen every year ends up going down our tile drains, too. Simply reducing nitrogen fertilizer levels to zero will not solve our water quality problems because the situation is much more complicated than that! These amazing naturally nitrogen-rich soils simply happen to require artificial drainage, that is tile drains, or they would be too wet in the spring to grow crops.”

This issue led to the use of subsurface tile drains across the Midwestern United States—and bioreactors with them. This would mean that existing conceptions of bioreactors would need to be adapted for use elsewhere in the US.

“The subsurface tile drains used widely across the US Midwest, and other regions around the world, are critical to the high crop productivity of our region,” explains Christianson. “The idea was first conceived by researchers in Canada and New Zealand in the mid-1990s to remove nitrate from shallow groundwater. Since then, we’ve advanced the design to make bioreactors work for tile drainage pipes, while keeping the design fairly simple and farmer-friendly, low maintenance.” Using a tractor and shovels, researchers lay gravel over woodchips in one of the bioreactors. (Credit: Eric May)

The team tested how three different varieties of bioreactors treated water in the Chesapeake Bay area. In each case, the water was already flowing through a drainage ditch, or routed for one. One bioreactor was actually in a trench; another was next to the trench; the third kind of bioreactor treated slowly flowing groundwater under the trench once it finally made contact. All three used some kind of wood or sawdust. All three worked well.

“The Mid-Atlantic region has some tile drains below the surface of fields, but really has a lot more agricultural ditches that are used to move water from fields,” Christianson explains. “We’ve been designing bioreactors to treat tile drainage (which is in a pipe) in the Midwest for about 10 years, and we wanted to modify the technology to treat water in agricultural ditches.”

While the three varieties worked in a general sense, refining the process is the next step.

“All three of the kinds we tested work, but they each had some pros and cons,” Christianson clarifies. “Long story short, we know this idea works now, but more bioreactors are needed to really start to make some design and management recommendations.”

The sawdust wall version was the easiest and least expensive bioreactor design, with installation taking one day. The in-ditch design was relatively more complicated and required two days for installation. And although a ditch diversion bioreactor requires taking some land out of production, its design process is more aligned with that of tile drainage bioreactors that people already have experience with.

Next in the process will be more testing and improvement of bioreactor designs.

“To test this practice at the field-scale with different design tweaks, it takes farmers who are willing to be at the leading edge of solving water quality challenges,” remarks Christianson. “It also takes research funding! We’re always on the intrepid hunt for both good partners and good funding.”