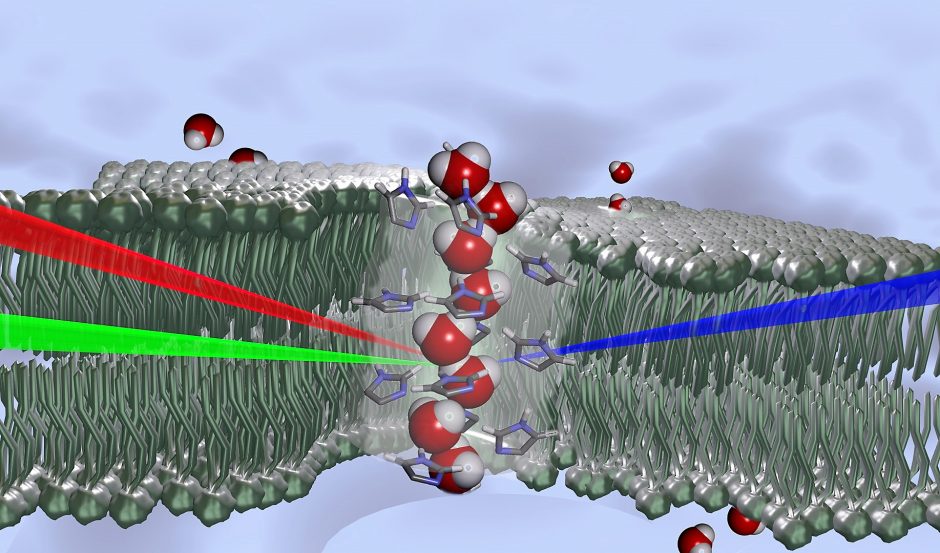 Schematic representation of water molecules with a wire-like structure oriented in a single direction in the core of a channel, shown as transparent. Formed from histamine derivatives, this chiral channel forms spontaneously within the phospholipid bilayer (in white) stabilized in aqueous medium (in blue). It generates a driving force for water transport. (Credit: CNRS)

A serendipitous discovery may lead to new water purification and desalination technologies. Corresponding author Mihail Barboiu of the National Center for Scientific Research, or CNRS, a public organization governed by the French Ministry of Education and Research, corresponded with EM about the research.

“We discovered artificial water channels by accident,” explains Barboiu. “Our research has been focused on materials for fuel cells, using imidazole-based molecules to build the system. We didn’t expect that these systems could form channels—and more importantly, would be highly selective for water! They were the first artificial water channels, selectively transporting water against ions.”

The team was able to observe water molecules organized in an oriented molecular wire structure, within a very restricted space using an innovative spectroscopic method. In other words, they observed water in a “chiral” state.

“The water wires can be confined within artificial channels that can be embedded in the bilayer membranes,” Barboiu details. “Under such physiological conditions, together with Poul Petersen at Cornell University, we used sum-frequency generation (SFG) spectroscopy a technique using two incident photons, of visible and infrared wavelengths, interacting with a sample, so that it emits a photon with the sum of the two incident frequencies, when this coincides with a resonant frequency of the sample. The process only works when the sample has no inversion symmetry, thus the system is chiral. Water is a dipolar molecule, and when all dipoles are oriented in one direction we have oriented or chiral water.”

Observing this kind of very regular molecular arrangement is not as unusual for solid natural structures, or for artificial compounds. However, identifying and observing chiral water, this kind of organization in a solution, was remarkable. In liquids, the molecules are quite mobile, making the high level of organization observed here extremely unusual. It was the lipid membranes’ artificial channels—which created physiological conditions much like those found in natural pores—that made the chirality possible.

These observations have interesting implications for how liquids move through membranes.

“Under physiological conditions oriented dipolar water wires is crucial, while the natural systems are effectively using oriented water clusters for selection and pumping,” Barboiu describes. “Aquaporins, the proteins that selectively transport water in the cell, selectively transport water against protons. The cations are selectively pumped against anions through Gramicidin channels based on oriented water wire. Interestingly, our channels are the first artificial systems in which chiral oriented arrangement of water molecules has been detected.”

This more orderly molecular arrangement allows for a more efficient process, one that uses less energy and is more mobile.

“The artificial water channels exhibit remarkable combinations of structural behaviors such as dipolar orientation of confined water, reminiscent of those observed in natural Aquaporins,” remarks Barboiu. “This orientation of water adopts the supramolecular chirality of the channel and is of prime importance for enhancing water and proton translocation along oriented water wires. In 2016 we showed that the activity of the chiral channels preserves a dipolar orientation and ordering of the water wires that is superior to that of the isostructural non-chiral channels—water polarization explains how water moves faster within the channel. But the physical proof for demonstrating the water orientation and polarization was missing until our current results.”

This research opens up the possibilities when it comes to water purification and filtration applications. The researchers are now developing reverse osmosis membranes for use in desalination, and have already achieved improved membrane selectively and permeability.

“Many other applications can be considered: the production of ultrapure water for vaccines, electronics, and other uses; alcohol/water separation for the beverage industry; the purification of high added value products from diluted solutions, and so on,” adds Barboiu.

What’s next for the researchers as they continue to pursue this fascinating line of work? Producing highly selective membranes for water separation is their next main objective.

Meanwhile, Barboiu and the team leave interested onlookers with a lot to think about.

“One might also consider the collective ability of such dipolar water molecules to potentially generate water-waves (waves of water dipoles), representing a sort of virtual superposition of all their oriented states operating collectively,” remarks Barboiu. “They are physically reminiscent of the waves of electrons, in that their spins behave collectively and stimuli produce adaptive behaviors. Determining when the functions of water-waves become observable remains an unconventional practice and challenge.”