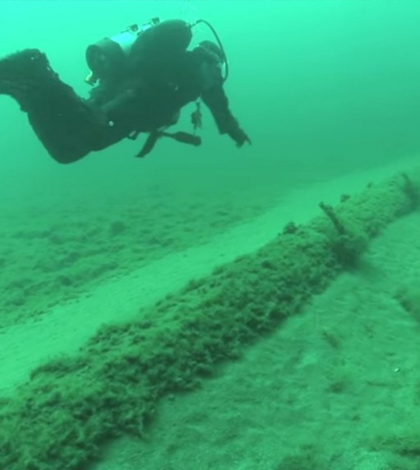 A diver for the National Wildlife Federation inspects the Enbridge Line 5 pipeline under the Straits of Mackinac. (Credit: NWF)

The cost for cleaning up a winter time oil spill in the Straits of Mackinac could cost up to $1 billion dollars, according to mlive.com. The Straits is home to an oil pipeline operated by Enbridge Inc.

The estimate is noted in a large dump of documents that the Michigan Attorney General’s office has posted online. The company handed them over to the state after its attorney general requested unrestricted reports and data on the pipeline.

Information in the documents cover repair logs, inspection reports and pipeline pressure, among other things. All of the papers are expected to be used in an independent risk evaluation that was recommended by a state pipeline task force in 2015.

The findings of the risk assessment will likely be used in determining Enbridge’s liability in a worst-case scenario pipeline breach as well as its responsibility for maintaining adequate insurance. Its current easement, established in 1953, has only a $1 million minimum.

Top image: A diver for the National Wildlife Federation inspects the Enbridge Line 5 pipeline under the Straits of Mackinac. (Credit: NWF)