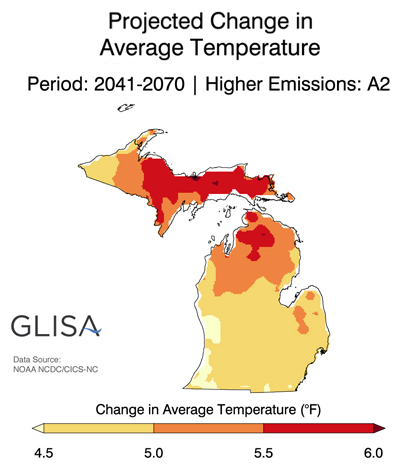 A new report released by researchers at Michigan State University and the University of Michigan describes changing climate conditions as threats to public health in the state, according to a release. Those conditions include things like warmer temperatures and more frequent heavy rainstorms.

Based on current climate trends in Michigan and projections for the next few decades, the authors identified five health topics of concern for Michigan residents. These include illnesses related to heat, water-borne diseases and injuries related to weather events, among other things.

According to the report, the average annual temperature has increased by 0.6 degrees Fahrenheit since 1951 in southeastern Michigan and by 1.3 degrees in the northwestern part of the Lower Peninsula. During that same period, total annual average precipitation across the state increased by 4.5 percent, or 1.4 inches.

To make the report, authors took existing climate data and examined how conditions in different parts of the state could change in the future.