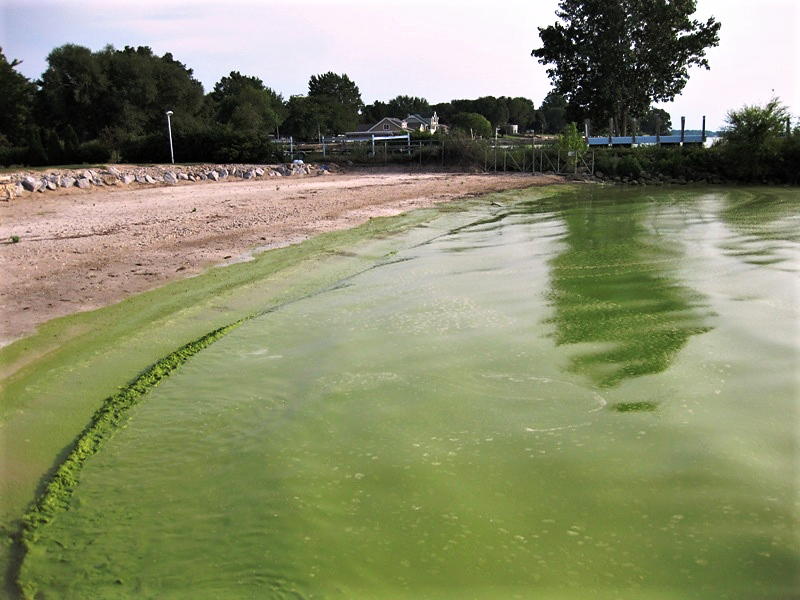 We’ve all experienced a “too much information” or “TMI” moment at one time or another, but when it comes to lakes and cyanotoxins, there’s no such thing as TMI. That’s one reason why recent work from North Carolina State University researchers is inherently important; more information about toxins in freshwater systems is always better. In this case, the research also provided mostly good news for the people living near Jordan Lake in central North Carolina.

Cyanotoxins in lakes, especially those that provide recreational opportunities and drinking water, can trigger concern or even panic in the public mind. At this point, that reaction is no surprise; during summer of 2016, for example, blue-green algae outbreaks sickened swimmers in Utah, closed beaches in Florida, and threatened local ecosystems in California. Summer is typically the high season for cyanotoxins, as the warm weather allows the organisms that produce them to bloom freely.

Astrid Schnetzer, an associate professor of Marine, Earth and Atmospheric Sciences at North Carolina State University (NCSU) spoke with EM about the work, which she completed with Dan Wiltsie, former graduate student and first author of the paper.

“The main thing for people to understand is when you look for the toxins, you typically can find them—although often in very, very low concentrations,” explains Schnetzer. “But they’re there. So it’s a matter of establishing a baseline and figuring out, do we have to be concerned about existing levels or worsening conditions? If so, which toxin might be the prevalent one in a given system?”

In other words, simply finding cyanotoxins isn’t enough to establish whether they pose an immediate health risk. This is where the careful analysis comes in.

Researchers like Schnetzer are working hard to give decision-makers better, more complete data for water quality issues. It’s a critically important issue, because although everyone needs clean, safe water, not every trace of toxicity is a threat.

“The cyanotoxin concentrations that we have observed in various freshwater systems throughout North Carolina, including Jordan Lake in this study, are nowhere near the levels reported in Lake Erie or similar systems,” confirms Schnetzer. “This study was laying a baseline for Jordan Lake. If we look at the algal taxa that are found in that system we see a lot of potential toxin producers but their presence does not automatically result in toxin production; certain environmental conditions trigger it. So a major issue for managers and stakeholders is, when is what’s there a potential threat?” There is a common notion that eutrophication, the presence of excess nutrients, causes algal bloom events in lakes to become bigger in magnitude and more frequent. While the questions surrounding cause and effect are never simple in these cases, for policymakers the most important questions to answer are fairly clear.

“One of the questions that’s sort of burning is do these events also become more toxic,” remarks Schnetzer. “Do I need to do something right now? Because we get phone calls asking about whether it’s safe to go in the water or not.”

Fortunately, Schnetzer and her team have better tools now to deploy as they track down toxicity than ever before, including solid phase adsorption toxin tracking (SPATT) bags.

“We use toxin tracking devices that are more sensitive in picking up low toxin signals from the water column,” details Schnetzer. “These SPATT units (essentially resin bags) have been used along the west coast, but they haven’t really been implemented and used here. The resin absorbs the toxin over time, so you get away from grab sampling which is hit and miss; algal blooms are ephemeral, easy to miss, when you go and you fill a sample bottle with a finite volume once. Water moves, these events come and go really quickly. The resin bags are deployed for over a month before they are exchanged, and you extract the toxin and see if there is an accumulated signal; you get a much better understanding of the system and see anything that’s in the water permanently or continuously. And that’s what we did for Jordan Lake.”

Interestingly, although researchers and water managers typically only look for algal blooms in summer and early fall, the team found two of the toxins, anatoxin and microcystin, were pervasive all year long. However, they were present at levels far below safe drinking and recreational thresholds.

“The cyanotoxin concentrations we detected in Jordan Lake were always below existing drinking or recreational thresholds that are set for North Carolina, which are rather conservative,” states Schnetzer. “But the fact that it’s around all year round raises questions on what it might mean to animals and humans that may be exposed to these toxins in a chronic fashion. Very little is known about the exposure pathways, and few epidemiological studies are available that have focused on human health risks. At least now we have a baseline for this environment and for North Carolina, information on the type of toxins and their concentrations to guide exposure studies.”

These results represent the first record for multiple toxins in a major North Carolina reservoir. Also notable is the fact that the team showed that multiple toxins were simultaneously present in more than 80 percent of the measurements. As Schnetzer points out, this certainly raises the question of what synergistic effects chronic, low-level exposure might produce.

The results of this research are hopeful in more ways than one. Yes, the measured levels during the study period from 2014 to 2016 were low enough for residents in the area to breathe a sigh of relief. But beyond that, Schnetzer points out that the way the study functioned was in itself a positive result.

“This was a real success story in regard to scientists, monitoring agencies and municipalities working together,” Schnetzer remarks. “The funding for this study came from the Urban Water Consortium via the Water Resources Research Institute of the UNC System and from North Carolina Sea Grant. The second wave of the study that we’re working up right now includes data from another half dozen freshwater reservoirs, resulting in one of the most comprehensive data sets for North Carolina on cyanotoxin presence and distribution. The sponsors really wanted to know if there were issues they might need to be aware of and they supported and led sampling efforts in several of the reservoirs providing us with samples.” “If you talk to these people, they’re so motivated, knowledgeable and passionate about these issues and the ecosystems,” Schnetzer says. “They really want to make sure that the information that they’ve already gathered is used to gain additional insight, and that people get the chance to really understand how these systems function and probe their health.”

And the final piece of the puzzle for this particular success story? Interested members of the public who cared enough to assist the project by collecting samples and submitting them for analysis.

“That’s been extremely gratifying from a scientist’s perspective, because we would never have enough sampling power or financial support to send our students or our technicians all the way to those remote places to sample,” Schnetzer points out. “If you can talk to those people, they can tell you it’s worse than it was five years ago, or it’s getting better, or I’ve noticed a difference, for example.”

While some might feel less receptive to the observations of laypeople, Schnetzer and many other scientists working in water quality see the value of local insights into the way water systems change. The team has also found the assistance of the Urban Water Consortium and local riverkeepers invaluable.

“I think that’s really important; I mean it’s their backyard, right,” remarks Schnetzer. “They have a kid that jumps off the pier into the water and the kids start coughing. You feel helpless because you don’t know what’s going on. We have the tools, and they have the historical knowledge and the ability to help out. It sometimes takes a long time to make that connection, but in our experience it has been working.”

It’s Dr. Schnetzer’s backyard, too, and this personal connection was also a source of motivation.

“I learned a lot about Jordan Lake, which is where I get my drinking water from. I drink out of a tap,” Schnetzer explains. “One of the first things I did was to visit the Cary water treatment plant. I got to understand how toxin removal is performed. And now with this baseline they will have an increasing wealth of information that can guide and inform toxin monitoring plans, and that’s a win all around.”