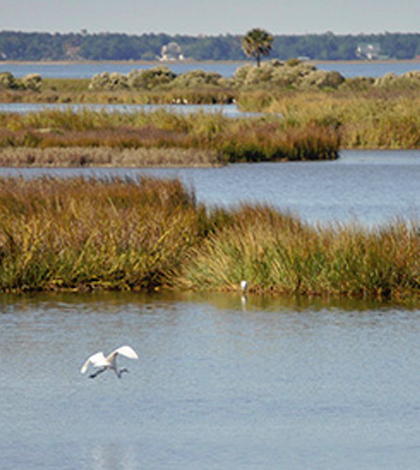 Scientists at the University of California, Santa Cruz, in collaboration with others from The Nature Conservancy and the Wildlife Conservation Society, have led an effort to calculate a monetary value for damage reductions provided by coastal wetlands during extreme storms. Their research has touched on a few of the most recent hurricanes.

Using modeling techniques, scientists studied the impacts of Hurricane Sandy in the Northeast United States in 2012, when New York and New Jersey were badly hit by storm surges. They found more than $625 million in property damages were prevented during the catastrophe by coastal wetlands along the Northeast coast.

Without wetlands, the damage bill would have been much higher for Sandy. Where coastal wetlands remain, investigators found damage from Sandy was reduced by more than 10 percent.

Such reductions to property damage came as a surprise, scientists say, while underscoring how critical coastal wetlands are for defense against hurricanes and other extreme storms. Their findings benefited from combining engineering models with analyses of coastal ecology and economics.

By bringing those together, investigators were able to quantify the economic value of natural defenses and show how they can be more effectively included in risk models and coastal management. The insurance industry is also keen to having the data for use in setting rates.

There were other important findings for coastal policy makers. For example, some townships with few coastal wetlands benefit greatly from wetland preservation in neighboring townships. And it seems that the value of wetlands to properties builds up as you move upstream from the coast.

Full results of the effort are published on the Lloyd’s Tercentenary Research Foundation’s website, one organization supporting the work.