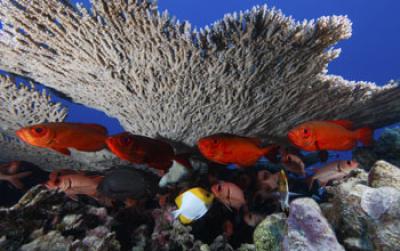 As the Earth’s climate warms and temperatures creep up around the world, acidity in the world’s oceans also rises. This trend is threatening coral reefs, and recent research has elucidated exactly how and why acidity impacts reefs, and how scientists can more accurately predict where coral will be at its most vulnerable.

The large underwater structures we call coral reefs are actually made up of the skeletons of hermatypic or “hard” corals, invertebrate marine animals. These underwater architects protect their soft bodies, each one called a polyp, by extracting calcium carbonate from seawater to form durable exoskeletons made of aragonite; it is these packs of aragonite crystals, plus other fortifying crystals which form the exoskeletons and comprise the reefs.

New coral polyps rely upon the calcium carbonate in their predecessors’ exoskeletons, living on them and eventually contributing their own exoskeletons to the structure. In this way, the coral reef gradually grows until it is massive, slowly, but always building toward the sunlight. As they grow towards the sun, they also thicken the skeletons and the structures themselves so they will be strong enough to withstand life underwater. Only exoskeletons supplemented with additional crystals can survive the rigors of marine living, withstanding waves, weather, and the insults from fish, mollusks, and others.

This trend toward the light is driven by the feeding habits of corals, most of which feed via their symbiotic relationship with zooxanthellae, a type of algae. The corals house the zooxanthellae inside their bodies, protecting them and donating carbon dioxide to them, and in exchange the algae feed the corals (and themselves) via photosynthesis. In fact, most corals are colorless without their algae tenants.

A new study, led by a team from the Woods Hole Oceanographic Institution (WHOI), reveals that while ocean acidification may not impact the extension of the reef, it definitely hampers the corals’ ability to thicken and strengthen the skeletons, decreasing their density and rendering them more breakable and vulnerable. Lead author Nathaniel Mollica discussed the research with EM.

“‘Outward growth’ is actually crystal growth on a micron-scale,” explains Mollica. “It’s not outward growth of the entire coral colony (i.e., its width). If you look at the skeleton with a microscope what you see is a scaffolding of skeleton on which crystals are growing in the upward direction, toward the light. This is what we call skeletal extension. We also see new crystals growing to fill in the gaps in the scaffolding, in another very important process called thickening or densification. The less the gaps are filled in, the weaker the scaffolding. Think about it like a skyscraper; if the walls are too thin the whole thing will fall down.” The team created a quantitative model that allowed them to simulate the corals’ skeletal growth mechanism. They used this model in tandem with forecast changes in the acidity of Earth’s oceans.

“Our research sought to isolate the skeletal features that are most controlled by the chemistry, which we found to be the density of the skeleton produced,” Mollica describes. “To do so, we developed a model that allows us to relate the ocean chemistry to the density of the skeleton. Models are a really great tool for making complex connections like this because we can quantitatively evaluate how well we understand a process by comparing simulations to real data. We can simulate how a coral will grow under different temperature, pH, etc. and compare the result to corals that actually saw those same conditions. This allows us to quantitatively assess the impacts of OA, isolating that stressor from the many others affecting coral growth like warming or disease.”

As levels of atmospheric carbon dioxide rise, seawater absorbs CO2. This triggers a series of chemical reactions that as a whole are the process of ocean acidification. One of the results of the process is an increase in bicarbonate (HCO3-) and carbonate (CO32-) ions. As corals drink seawater into their intercellular calcifying space, they have a given number of HCO3-, CO32- and calcium (Ca2+) ions to work with. They pump out hydrogen ions (H+) to create more carbonate ions (CO32-) ions, so they can more readily arrive at their final product, needed for skeleton building: calcium carbonate (CaCO3). However, excess CO2 in oceans means fewer CO32- ions and more HCO3- ions—and this, of course, means it’s much harder to make CaCO3.

The results indicate serious drops in the density of coral skeletons, in many areas, particularly the Indo-Pacific region. In fact, the model projects density reductions of up to 20 percent by 2100 in the region bounded by the waters of Malaysia, Indonesia, Papua New Guinea, the Philippines, the Solomon Islands, and Timor Leste—a region called the Coral Triangle. Corals in Hawaii, the Caribbean, and the northern Red Sea may be at less risk, with declines of less than 10 percent due to ocean acidification.

The team chose to model the growth of Porites, a dominant reef-building coral.

“Porites is pervasive on many reefs and can be found in every ocean,” remarks Mollica. “And it is a dominant reef-builder, a very important keystone genus. For this study, we looked for a coral that spans the entire range of pH found on reefs today, and Porites does that so it’s very useful scientifically. There’s also been a lot of work done previously on skeletal growth processes in this coral, it’s often used as a model organism for coral growth studies.”

“We collected coral cores from live colonies on four different Pacific reefs, along with seawater samples taken to analyze the carbonate chemistry of the surrounding seawater,” details Mollica. “We then used a 3-D Computerized Tomography (CT) scanner to image the cores and determine the skeletal density at any given time in the coral’s history. Matching the skeletal features to the seawater chemistry, we can directly compare the coral growth with its environment in the past.” The corals were simply unable to produce sufficient aragonite to thicken the skeleton as much as they had in the past, although they continued to grow upward toward the light. The result was that corals in more acidic waters were building thinner, more vulnerable skeletons that can more easily be destroyed by organisms, weather, or wave motion.

Ocean acidification is, of course, not happening in a vacuum. Warming waters will also affect the ways that corals grow, and whether they survive, along with the other organisms in their ecosystems.

“The predictions we make in this work only address one of a multitude of environmental factors affecting reefs today and into the future,” cautions Mollica. “A significant amount of research has gone into understanding these factors and how they will interact, however in order to fully understand and prepare for how a changing climate will affect reef ecosystems a lot more work needs to be done.”

Study of multiple stressors will come next, and hopefully more projections—and undeniable data for policymakers.

“The inspiration for this work comes from a love and deep sense of responsibility for our planet,” Mollica states. “Human activities have drastically altered our environment and those changes are escalating as more and more CO2 is released into the atmosphere. Coral reefs can be thought of as the canaries in the coalmine because they’re on the frontlines of these changes, they’re sensitive, and their responses—such as coral bleaching—are obvious: you can see it, photograph it, and show the world what’s going on. Ocean acidification (OA) is affecting coral reefs too. The effects happen in the skeletal structure so they’re not as obvious as bleaching, but our study pinpoints where it is happening. And once you know where to look it’s pretty clear.”