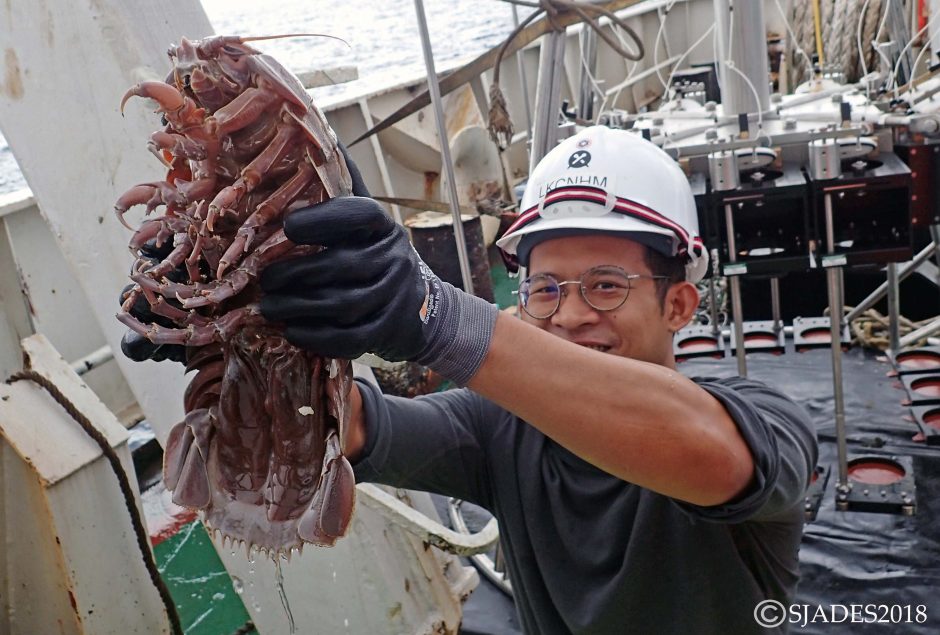 What do more than a dozen new species of crustaceans, Cyclone Marcus, 31 researchers and support staff, more than 40 new records for Indonesia, and more than 12,000 marine creatures have in common? The successful South Java Deep Sea Biodiversity Expedition 2018 (SJADES 2018), of course. The team returned from their odyssey in April, and Professor Peter Ng, Head of the Lee Kong Chian Natural History Museum of the National University of Singapore, and Professor Dwi Listyo Rahayu, Senior Research Scientist at the Research Center for Oceanography of the Indonesian Institute of Sciences, corresponded with EM about the expedition.

Professors Ng and Rahayu led the team on the 14-day expedition.

The expedition team made up for lost time, collecting some 800 species from more than 200 families of crabs, fishes, jellyfishes, mollusks, prawns, sponges, starfish, urchins, and worms during the voyage. The team discovered more than a dozen completely new species of crabs, hermit crabs, lobsters, and prawns, and over 40 species that are new records for Indonesia. 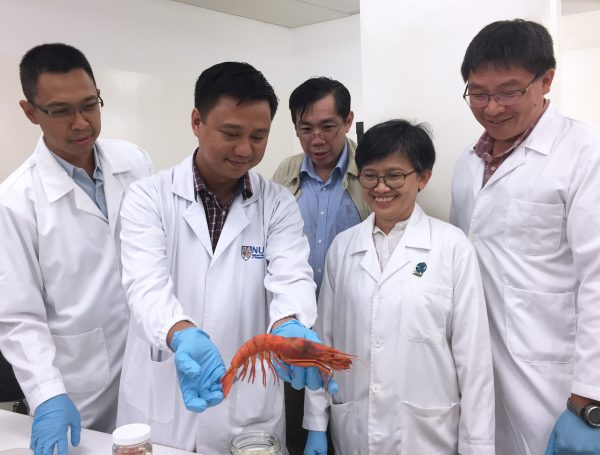 “Most [of the new species] were crabs, shrimps, and lobsters as we had the world experts on board who knew their animals well,” remarks Professor Ng. “We had a number of very cool spider crabs, a beautiful green-eyed hermit crab, a zebra-patterned squat lobster, and even a beautifully sculptured shrimp with glowing eyes. And of course, we found a 30-centimeters-long deep water isopod to boot!”

In all, the researchers sampled at 63 stations at depths of an average of 800 meters in less than 14 days, on a round-trip loop from Jakarta that covered 2,200 kilometers.

“We used 4 methods: trawl, dredge, box-corer and multicorer,” Professor Rahayu describes. “These methods help us sample different systems for different animals. In 12 operational days, we covered 63 stations. It may sound like a lot, but it is reasonable. Some of the expedition members, especially the crustacean team, are world experts on various groups of shrimps, crabs and lobsters. They know the fauna very well so they can quickly identify what is what is new and what is not.”

Initially, the team ran into difficulties due to Cyclone Marcus. Thanks to a day or two of cyclone conditions in the open sea, it was a trial by fire for new researchers, so to speak. 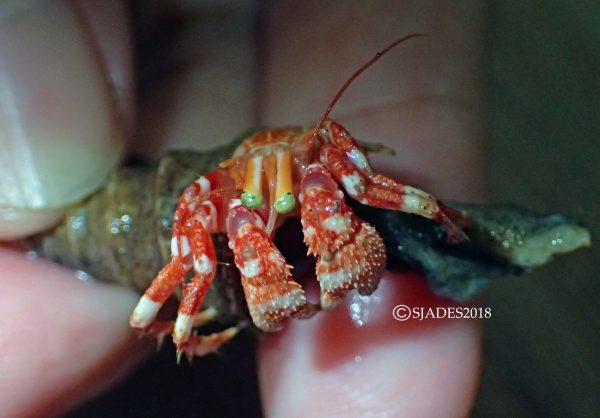 “When you are in the open sea—we were in the Indian Ocean—the waves are generally higher, so the impact on us was much greater,” remarks Professor Rahayu. “For land-lubbers like us, it is hard. Many of us were seasick on the first day. By the second day, we were getting acclimatized. The catch was good and we just carried on. A lot of things were new to us—deep-water trawling, setting gear at depths of 2000 meters—it was not easy for the scientists and crew, but we learned on the job.”

Another source of unexpected learning for the team came from the depth maps for the region, in that many of them were incorrect.

“I remember a place where the depth was indicated as 100 meters and the vessel’s echo-sounder on the boat, which checks for the depth, indicated it as 800 meters,” Professor Ng describes. “Many parts of the map were done many years ago, so inaccuracies can be expected. It makes for much harder work especially when you send your trawl down on what you think is a flat area and then it suddenly goes up and down. But as with all of these things, you adapt!”

The team did not focus on water sampling, testing, or quality analysis during the trip as that was not their focus. The main objective of the expedition was to conduct a biological survey of the area, so they stuck to exploring marine life in the region. However, the specimens did provide some insight into the local water quality.

“We believe the water quality in most parts of the deeper waters is pretty good as the fauna is rich,” states Professor Rahayu. “Diversity of fauna correlates well with environmental health.”

The professors leading this expedition each have a long history of successful scientific collaborations, and they wanted to use this powerful tool with their students to foster the same values in the next generation of researchers. 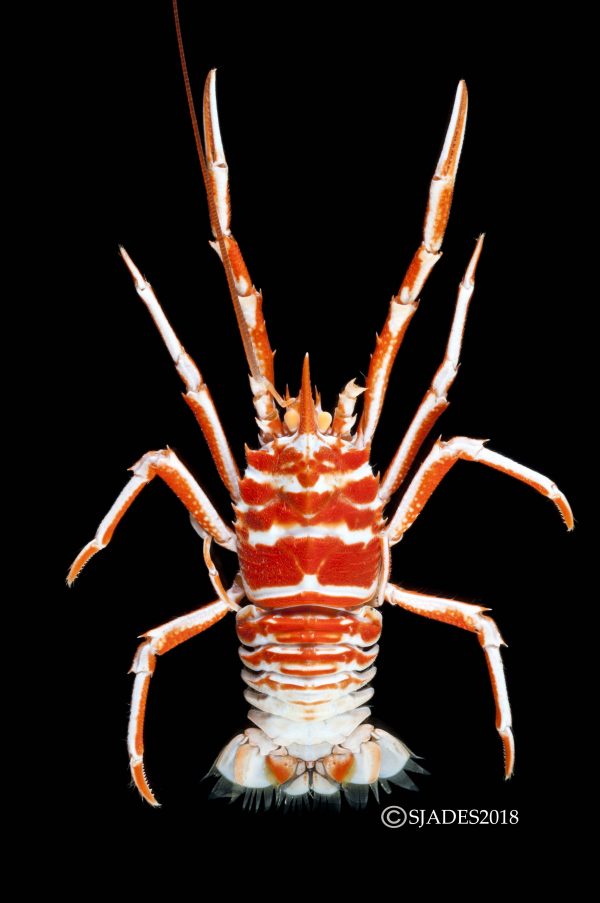 This was among the 20 species of squat lobsters found by scientists on the expedition. This beautiful species has a distinctive zebra pattern on its body. (Credit: SJADES2018)

“In 2002, Indonesia and Singapore tasked my Indonesian friend, the late Kasijan Rohmimohtarto, and I to organize a biodiversity expedition to Anambas Islands,” details Professor Ng. “It was part of the ASEAN confidence building in matters pertaining to the South China Sea. Since then, we have been exploring if we can do more. As I have been doing a fair amount of deep-water studies of animals in the Indo-Pacific, I was keen to see if we could one day do a deep-water survey as well. My present co-chief scientist Prof Rahayu has the same deep-water interest, and she and I have worked together on many deep-water crustacean projects before, so we discussed possibilities. And after much planning—we did it.”

The team sees the expedition as not only scientifically important but significant for the relationship between Singapore and Indonesia.

“In a way, we are using science to forward our national relationship,” comments Professor Ng. “Indonesia and Singapore have been close partners for a large variety of projects, and of course, that includes science. Having scientists work together like this is wonderful, not just strengthening ties but ensuring the future. Both Prof Rahayu and I made sure that about two-thirds of the expedition team were scientists who are 40 and below. Many did not know each other initially. What was good was that they are now good friends, and we hope they will take these close ties to the next generation. Prof Rahayu and I have worked together for decades, and now, we have helped to strengthen the scientific ties and lay the foundation for the next lap.”

This is also crucial to keeping new scientists engaged with our world underwater, where old-school techniques become new again as technologies advance. This kind of research has to be a passion for anyone who does it. 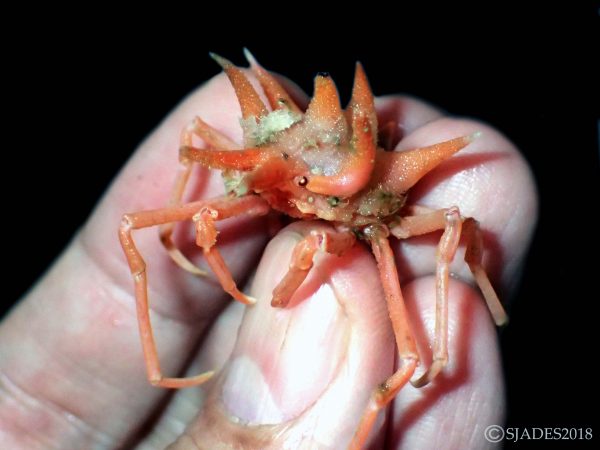 A stunning orange species now ascribed to Rochinia with many strong spines. Only one specimen of this rare species was obtained from southwestern Java. (Credit: SJADES2018)

“Deep sea exploration using our sampling methods is not a new science,” details Professor Rahayu. “The methods are generally the same as those done decades ago. However, we have more modern equipment and a modern vessel. Technology enables but does not solve all problems. The deep sea is a harsh environment to study, as it is complex and expensive. It is almost like an alien world deep below. The depths are punishing due to the extreme pressures the water exerts. There is no light. The terrain is mostly uncharted, rough and unpredictable. It is hard work. A lot of the sampling that we did was based on instincts, reacting to the challenges as they happen (e.g. when the trawl gets snagged by a rock in the deep) or when the waves threaten to throw everyone off the boat.”

This kind of research also reminds the rest of humanity why the oceans deserve our attention and respect.

“Did you know more people have been to the moon than to the deepest parts of our oceans?” marvels Professor Ng. “It is tragic that we know more about an extra-terrestrial object than we know about our own planet and the life forms that live here. We must change this. We must understand our own planet better and do our best to conserve it as it is our only home!”