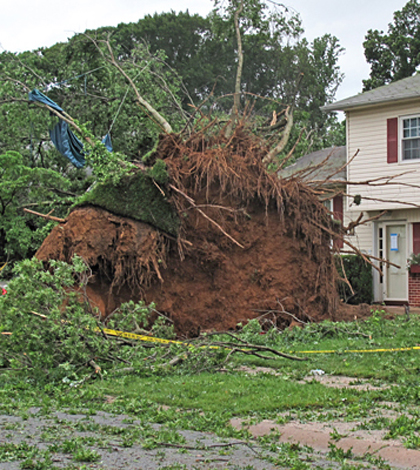 A University of Delaware monitoring network picked up a tornado that touched down in Newark on June 10, according to a release. Tornadoes are rare in the state, but sensors were there to capture it.

The Delaware Environmental Observing System, which supplies data to the National Weather Service, charted the tornado with winds of 65 to 85 mph. The observing system also measured the heavy rain that accompanied the tornado.

Experts say a low-pressure system and cold front in the Ohio Valley met with warm air in Delaware, which set off the churning clouds that ultimately generated the tornado. The tornado was picked up by a weather station nearly a half mile away, which measured wind speeds at 20 mph.

Image: A tree uprooted by the rare tornado detected by the Delaware Environmental Observing System (Credit: Tammy Beeson/University of Delaware)