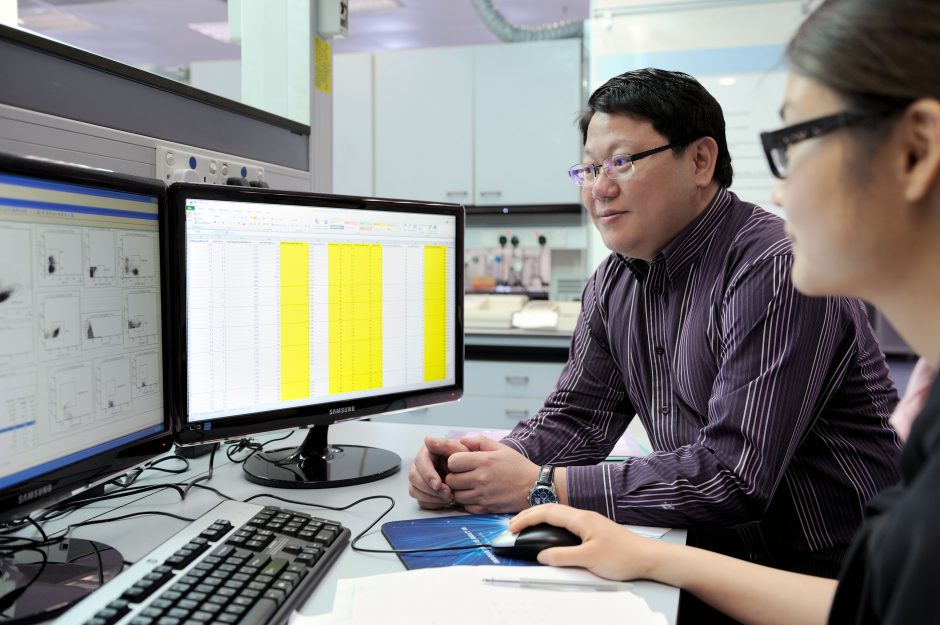 The presence of metals and metalloids in marine ecosystems is an environmental concern worldwide. Elevated concentrations of metals like cadmium, chromium, mercury, and nickel can harm marine animals, not to mention the humans who eat them. This means that developing water quality criteria (WQC) or environmental safety limits for a range of metals and metalloids is critical to public and environmental health. This need to know the maximum safe levels of these elements is also typically a precursor to creating protective regulations.

Nevertheless, the task itself has proven challenging. In Australia, Europe, and North America, WQC of metals are currently derived from laboratory-generated data. Toxicity tests generate these data, but the tests are conducted under fixed laboratory salinity and temperature conditions with different marine organisms in various locations. Laboratory and natural environmental conditions may vary significantly between geographic regions, for example, between temperate and tropical regions, and seasonally. These WQC, therefore, may not actually protect the species they’re designed to help in all of the various marine ecosystems they inhabit.

“Currently and conventionally, EQBs such as water quality criteria are usually derived based on toxicity endpoints (e.g. no observable effect concentration [NOEC] or no observable adverse effect level [NOAEL]; median lethal concentration [LC50]; median effect concentration [EC50]) generated from laboratory experiments which are conducted under fixed conditions (e.g. at temperature: 25 degree C, pH: 8 and salinity: 33 part per thousand adopted in toxicity tests here in Hong Kong),” explains Professor Leung. “Nonetheless, the natural environmental condition of coastal waters varies temporally and spatially. In Hong Kong, for example, the seawater temperatures vary seasonally between 15 and 30 degrees C, while we have an increasing gradient of salinity from western estuarine waters to eastern oceanic waters. Over time, our experimental results showed that the toxicity endpoint of a chemical contaminant like copper dramatically changed if the temperature and salinity changed.” 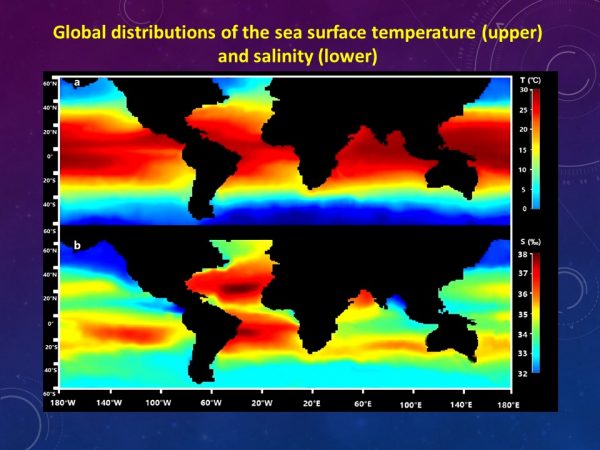 Global distributions of the sea surface temperature and salinity. (Credit: The University of Hong Kong, https://www.hku.hk/press/press-releases/detail/17774.html)

Researchers have long been working to protect the environment by predicting the toxicities of metals and deriving their WQC. Recent work from a team led by Professor Leung and Professor Wu Fengchang, Director of State Key Laboratory of Environmental Criteria and Risk Assessment at Chinese Research Academy of Environmental Sciences (CRAES) and Academician of Chinese Academy of Engineering, has made an advance toward this goal.

The trouble with metals

“At the optimum salinity, the organism uses less energy to balance their minerals via osmoregulation, and hence has more reserve energy to combat the metal toxicity,” details Professor Leung. “At the same time, it is common for metal toxicity to increase with increasing temperature. Any attempt to unify these highlights the practical imperfections of the current approach to deriving EQBs based on lab tests with fixed conditions.”

“If this is successful, then we can derive site-specific and adequately protective EQBs that better protect coastal marine ecosystems worldwide,” comments Professor Leung. “Although the models described in our paper are not yet perfect, this work laid an important cornerstone and paved the way toward our goal.”

“The traditional way of setting WQC is more or less based on an average scenario; the tests won’t capture the worst case conditions,” remarks Professor Leung. “As shown in our study, the worst case scenario for metal toxicity would be at high temperature and low salinity, resembling estuarine ecosystems in the summer rainy season. Under such a scenario, the WQC derived the traditional way would not offer adequate protection, because the marine organisms under such conditions are more sensitive to the pollutant.” 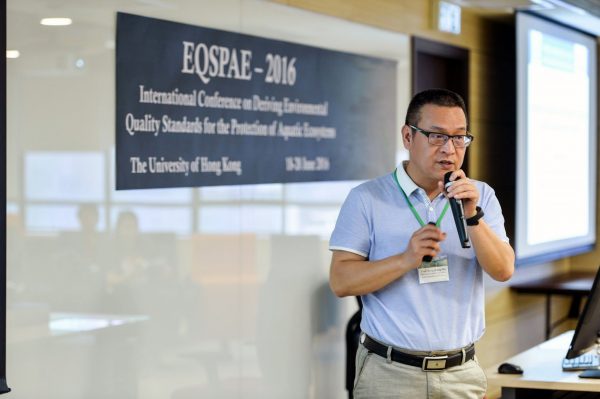 Second, they modeled how various marine organisms respond to metals under different temperature and salinity regimes, based on empirical data generated from lab experiments conducted under different conditions. Global data for annual average temperature and salinity in sea surface areas were collected from a real-time geotropic oceanography database.

Third, they combined the data generated during the second step to create temperature-and-salinity specific species sensitivity distributions (SSDs). These represent a distribution of the toxicity endpoints for different marine species in the ecosystem of concern.

“Finally, we integrated steps one and three to develop the empirical model,” Professor Leung concludes. “For metals that we generated lab data for in step two, we checked if the model prediction was good or not. For other metals without the empirical data, we could only generate the interim WQC without validation.”

Obviously, the team was limited in the number of species they could work with during step two of this study’s process, but this didn’t impact their results very much.

“Over the past decade, my research team has been working on how temperature and/or salinity can modulate chemical toxicity to aquatic organisms, and we publish extensively on this topic,” describes Professor Leung. “By combining the two, we found that the temperature effect is dominant and more important than the salinity effect.”

Teams around the world will now be working to improve and practically implement these methods in coastal marine environments—to ensure that we’re monitoring the right things at the right levels.

“Since our models are not perfect yet, we still need to include other influential factors such as concentrations of dissolved and suspended organic matters which can greatly affect the metal speciation (i.e., physicochemical properties) and confound our predictions,” explains Professor Leung. “After we improve our models, we will generate modeled WQC and will validate them through field-based study to confirm whether the ecosystem, e.g., species richness, is protected at or below the modeled WQC. Once validated, the model can be implemented.” 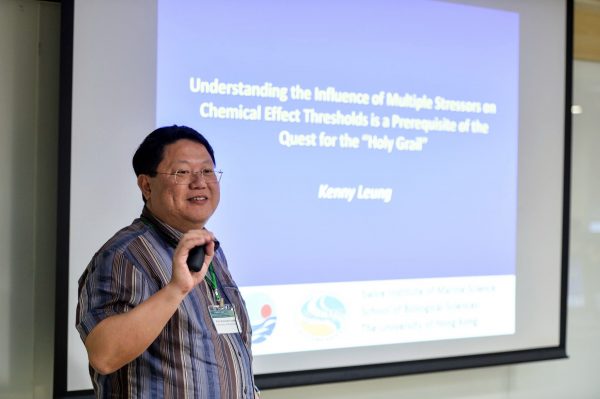 After the team published their paper in April, the Environmental Protection Department of the Hong Kong Special Administrative Government asked them to use the model to provide site-specific WQC for various metals for different parts of Hong Kong’s marine environment.

“We did that and provided the modeled WQC to the government, and they found the data useful to serve as a reference for evaluating whether the current environmental concentrations of metals in different sites are safe or not,” adds Professor Leung.

This application highlights one of the strengths of this method: its adaptability. Users can adjust it for the specific conditions of any local environment, sometimes with important socioeconomic benefits.

“We can save money by doing less toxicity testing; it also means killing less animals and using less toxic chemicals,” remarks Professor Leung. “When the modeled WQC can adequately protect different marine environments worldwide, it will improve the environmental quality and may increase biodiversity and fishery resources, eventually bringing positive gain to human society around the globe.”

In the near future, Professor Leung and the team will be exploring other practical applications and theoretical research avenues.

“The uncertainty or sensitivity analysis results generated associated with the model will provide us some insight into other potential factors that modulate the chemical toxicity; from there, we may be able to develop some novel hypothesis for further testing,” comments Professor Leung. “We also plan to improve the model by including factors like dissolved and suspended organic matter. It also has the potential to expand to other classes of chemical contaminants such as POPs.”