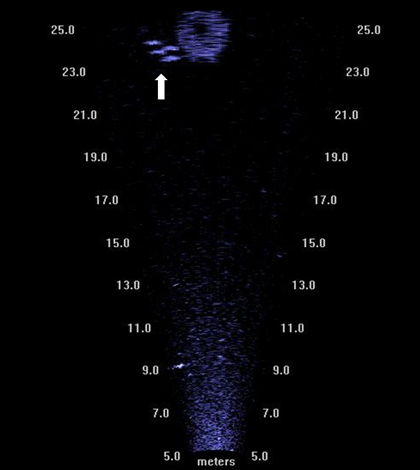 While the behaviors of fish can be studied using underwater cameras or electronic tags, there are limitations to both those technologies. With cameras, scientists need enough light penetration to record quality images. And the tags are mostly useful when fish swim pass acoustic stations that record their trips by.

Instead of relying on either of those for a recent investigation into the spawning habits of Allis shad, researchers led by the University of Cologne have used Dual-Frequency Identification Sonar, or DIDSON. It allows for high-resolution imaging of fish behavior both underwater and at night, permitting scientists to capture the details of fish life under the surface with less difficulty.

Investigators used a DIDSON device below a hydroelectric power plant to study the fish’s spawning. It was able to detect spawning activity by recording specific swimming patterns the fish make.

Most of the fish recorded moved rapidly in a circle near the surface. If mating was successful, the video also captured the release of eggs and sperm into the water column as a cloud. In just three nights, researchers detected 372 mating clouds.

But what scientists couldn’t tell was who came to the party. By watching the video, they discovered that spawning among pairs of fish occurred 70 percent of the time, but the rest of the time — 30 percent — there were up to seven fish leaving the cloud. The next question is whether the fish were invited for group spawning or if these were males sneaking into spawn at the last moment.

Findings of the work into Allis shad spawning will help inform how to best structure reintroduction programs to help the fish species recover in Europe. Data from the DIDSON work can also be used for population models incorporating info about spawning activity and success.

Full results of the work are published in the Journal of Fish Biology.